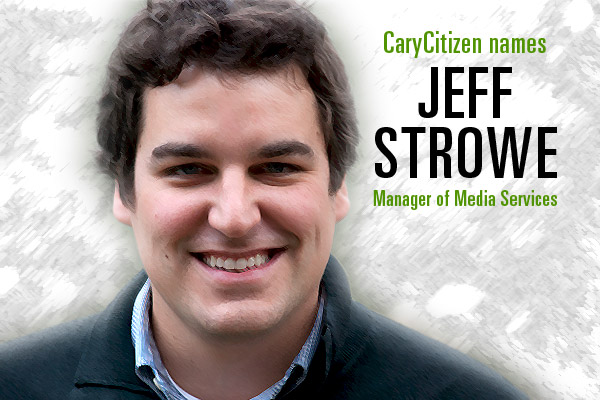 Cary, NC – Coming on the heels of our one millionth story view, CaryCitizen kicks off 2012 with several new improvements. Most notably, we’re please to announce that Jeff Strowe is joining the organization as our first full-time Manager of Media Services.

Some of you may already know Jeff from his previous stint as a high school teacher at Green Hope and Enloe here in Wake County.

As Manager of Media Services, Jeff’s job is to serve local businesses and organizations and help them communicate in a digital world. He’s the quintessential creative technologist, easy-going and at the same time, analytical.

Jeff was born in Akron, OH but grew up in Raleigh where he graduated from Cardinal Gibbons. He earned his B.A. in English from App State and an M.Ed. in Counseling from NC State.

“I’ve known a lot of kids and parents as a teacher,” Strowe said. “Cary is a very active and involved community.”

Strowe continued, “CaryCitizen clearly fills a need for local journalism and helping businesses to communicate. I’m excited to be here.”

While some organizations take a year or more to upgrade the design of their websites, we did it over the weekend.  Just one more reason we love Open Source websites.

The updated CaryCitizen website design has lots of small changes, but the biggest difference is an increase in the size of pictures we can use in CaryCitizen stories – up to 600 pixels across. The old standard was 480 px, so that’s a big difference.

The home page is organized much the same as in the old theme – we didn’t want to promote Future Shock by moving everything around. But you’ll notice more line space in the text, and a serif font, making it easier to read.

We’ve also added a second Big Box ad on the home page and killed off the footer ad. Bottom line for advertisers – more of our most popular ad zone and more exposures above the fold.

One more dramatic change – archive view now features big pictures instead of tiny thumbnails. As an example, take a look at the new archive layout for the Food category.

Let us know how you like the new design. And say hi to Jeff if you see him around town.

Inside the Eye: Staal Leads Canes Past Leafs 4-3 In OT