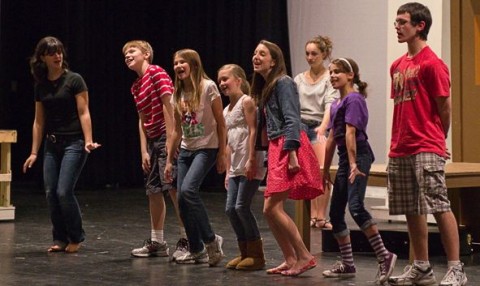 Cary, NC- Last week I had the pleasure of attending an early rehearsal of The Sound of Music, Panther Creek High School’s 2011 Spring musical.  To my surprise there were several familiar middle school faces in the cast.As everyone knows, The Sound of Music‘s main characters include the Von Trapps, a large motherless family. A sister school, in this case Mills Park Middle, provided some of the cast members.

Mills Park has only been open for about 6 months, and Bing Cox, the PCHS theater director contacted the drama club teacher back in January for some students to audition for the parts of the youngest Von Trapp children. Four middle schoolers were cast. Sixth graders, Grace Lee and Grace Brandt are playing Gretle and Marte.   Rebecka Chase, currently in seventh grade, is Brigita. The parts of Kurt and Frederick are played by novice actors, Alex and Brian Demeyer. Brian told me how he came to audition. Apparently he lost a bet with a friend and as payment, this band member had to audition as payment.

The lead of Maria is played by Lizzie Meyhew, a current senior at Panther Creek, and veteran actress who plans to study music education as a music major at Wingate University in the fall. Lizzie has been in two other PCHS productions including last year’s Pippin and How to Succeed in Business. Even though the rehearsal was a little green, her voice on the solo parts was clear as a bell and I am sure she will make a wonderful Maria.

The students expressed their confidence that “everything will come together” and stated that the group has practiced every day after school since casting took place in January. Olivia Jewell, a sophomore who plays Louisa said “one of her favorite parts of the production was singing with the younger kids from Mills Park”.

In these days of budget cuts, there is no drama or chorus at many middle schools. Teachers instead must volunteer to mentor clubs which may or may not produce a play. The opportunity that PCHS Drama Director Cox offers these kids is unlike any other opportunity available to them. Olivia said that when the school produced Jungle Book, auditions were available to younger kids to play some of the animals.

Tickets for The Sound Of Music

Tickets are $10 each and will be available through www.seatyourself.biz/panthercreekhs.

We also wrote about a benefit PCHS is holding to raise funds for their Fine Arts Booster Club.