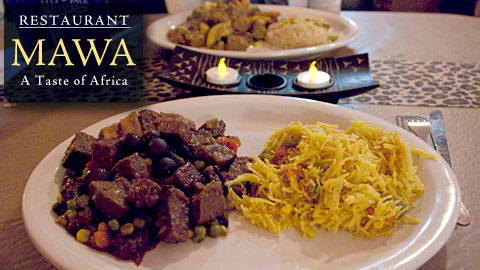 Morrisville, NC – Chicken and steak is great. I love my tilapia, tuna and tilefish, too. But where can you go for goat?

The answer is Mawa’s in Morrisville.

What to expect at an African restaurant? First, a geography lesson.

Africa is a continent. Mawa’s is unique in that offers dishes from many different African nations. From their website:

Egyptian food have a great deal of Greek, Lebanese and Mediteranean influence in them while Senegalese cuisine tends to have French and Asian touch.

Kenyan food includes a lot of Indian spices such as curry and further down in Mozambique, the enticing  flavors are distinguished by the Portuguese influence while South African cuisine is called “rainbow” and rightly so as it has become largely polyglot.

Ethiopian cuisine, the most familiar type of African cuisine and best known in the US is comprised of a variety of vegetable entrees from mild to extra hot and has became one of the favorite  styles of cuisine to the Vegan patrons.

Mawa’s menu has something for everyone – chicken, beef, fish, seafood. Also goat and lamb. But it’s the way things are cooked and their flavors that makes this restaurant a winner.

Spices are mild, not fiery for most dishes. Aromatics and citrus combine with the ancient flavors of the trade routes – cloves and figs, dates and couscous.

We started with the black-eyed pea fritters. Light and tasty with more body than wheat flour and a mild, nutty flavor.

A Tajine is a typical Moroccan dish. Mawa’s lamb tajine had lamb, dates, prunes, olives and vegetables in a rich honey sauce over couscous.

The lamb cubes were superb – choice cut, lightly grilled and lots of them. Their texture made a nice contrast with the soft fruit and vegetables in the stew, cooked down until their body seemed to infuse into the light sauce.

That’s one thing to like about African cooking – it’s pretty light. Not a lot of heavy sauces and creamy extravagances.

Like the tajine, it is a stew. The curry is mild and the vegetables are cooked down to blend with the sauce.

The goat was lean and tender, cut down into cubes. It had a lighter texture than the lamb, but was equally satusfying.

Mawa’s is a very comfortable room – warm, low-key lighting, a soft touch of exotic music in the air and a decor that puts you in a small cafe in Paris or Tangiers.

The service was welcoming and helpful, but not too intrusive. Perfect.

A small stretch of Morrisville has a remarkable variety of restaurants. Mawa is in Morrisville Square.

The same shopping plaza has Mexican, Indian and Chinese restaurants, plus an Indian grocery store.

Morrisville Square is on Morrisville-Carpenter between Davis Drive and Chapel Hill Road. 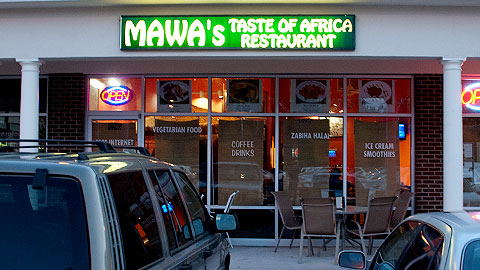 Chef’s Academy Picks Morrisville Weekend Round Up: Road Race, Music and Soccer Season
Scroll to top
%d bloggers like this: