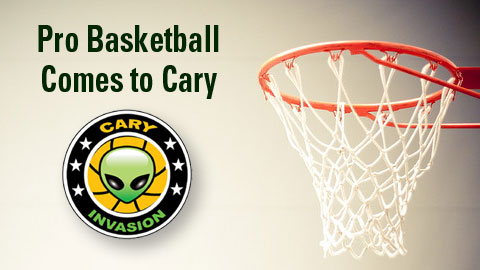 Cary, NC – Thanks to a tip from our downtown friend Doc Thorne, we’ve learned that Cary is getting a new professional sports franchise. It’s the Cary Invasion, a team in the Continential Basketball League.

The Continental Basketball League (CBL) fields ten teams in the Southeast including Miami, Birmingham, Savannah and now Cary. Along with the American Basketball Association (ABA), the Premier Basketball League (PBL) and the NBA Development League, they are part of a network that form the minor leagues for professional basketball.

According to the CBL website, the league plays a 12 game schedule with a four team playoff and championship at the end of the season. The first Cary Invasion home game is listed as Friday, May 13.

The Cary Invasion will play their home games on the Kay Yow Court at Herb Young Community Center.

Professional basketball comes to downtown Cary. How cool is that?

Mark Janas was an original and founding member of the Wilmington Sea Dawgs, one of the most successful teams in all of independent minor league basketball.

After nearly 6 years with the Sea Dawgs, Mark sold his interest in the group in order to concentrate on developing the Cary Invasion.

“The (Cary) team has been in the planning stages and ready to pull the trigger for over a year,” says Janas.

In addition to holding down positions as General Manager and Owner of the Invasion, Mark is also the Managing Partner of In3, Inc., a software and business development firm.  He is a graduate of UNC Chapel, has an MBA from UNC Greensboro and has completed his doctoral studies at the United States Sports Academy.

MarQus Johnson has been named head coach of the Cary Invasion.

Johnson was a standout player at East Wake High, NC Central and a coach at NCCU, St. Augustine’s and Shaw.

Get more information about the Cary Invasion basketball team and tickets when they become available (the website says April 25) at: www.CaryInvasion.com