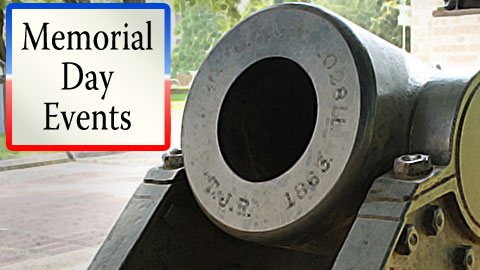 Story and photo by Brennin Cummings.

Cary, NC – Growing up, Memorial Day meant a lot of things to me – the end of the school year, beautiful weather, and my family’s annual Memorial Day party. However, it also meant playing my trumpet at memorial services for veterans around my hometown.

My father also plays trumpet, so he would take me and other kids from the trumpet section in my middle school band to local cemeteries, where he would lead us in the playing of Taps.

Taps is an easy song to play- on trumpet you never move your fingers- but its power cannot be overstated. As we played, the men in uniform held their arms up in a stiff salute, their eyes glued to the American flag waving before them. Even as a 6th grader, I understood that their minds weren’t in the cemetery at that moment. The notes were carrying them to distant lands and reminding them of fallen comrades that gave the ultimate sacrifice for our country.

Memorial Services in the Triangle

This year, a number of memorial services honoring the veterans of the United States are occurring in the area.

If have information about other Memorial remembrances throughout the Triangle, please add them in the comments to this story.

Education: Weigh In On School Assignment