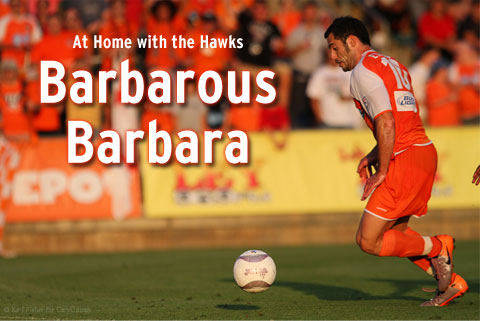 Cary, NC – Saturday was another wonderful night to be at WakeMed Soccer Park in Cary.  The weather was great and the Carolina RailHawks earned another 3 points against the Puerto Rico Islanders, staying at the top of the league in the NASL.

Forward Etienne Barbara continued to beast on opponents. He scored two goals and had the assist on the third, giving the RailHawks a 3-0 win.  That brings Barbara’s total to 11 goals for the season, and he earned his third two goal game of the season. He leads the NASL in scoring. Positively Barbarous.

The game started with both teams trying to find their rhythm, and the Railhawks quickly found theirs. Barbara scored in the 26th minute and put Carolina ahead by one goal at the half, but they did not settle for one.  Carolina kept attacking, and Barbara scored again in the 53rd minute, giving the Railhawks a two goal lead early in the second half.

The RailHawks were relentless, and Pablo Campos scored in the 67th minute with a fantastic through ball from Barbara.

This wrapped up the scoring and was a great win for Carolina, sending them further up the table and giving them a 6 point lead.

The RailHawks take on the last-place Atlanta Silverbacks on Saturday, May 28th and will look to extend their seven-match undefeated streak.   Hopefully they will earn another three points to extend their lead at the top of the table. Get tickets.