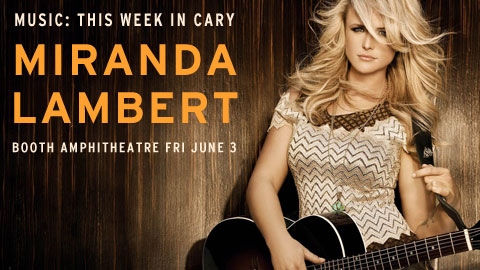 Cary, NC – This Friday, June 3, rising country star Miranda Lambert is coming to Cary for a show at Booth Amphitheatre. Is she the next Taylor Swift or the next young star swiftly forgotten?

Back then, New Country put a rock and roll beat underneath the traditional chords and melodies.

Miranda Lambert is part of the next generation of country stars, further broadening the vocabulary of country both in terms of the musical influences and the subject matter.

One thing hasn’t changed about country music – Ms. Lambert is packaged as the Blond Bombshell. The second coming of Marilyn Monroe with an electric guitar. Who could live up to that?

What’s interesting is Lambert’s own commentary on country music stereotypes. One example is the song Only Prettier.

The tune starts with steel guitar and a definite feeling of the Fifties. Lambert plays two characters in the video: the pampered blond belle and her bad-girl brunette doppelganger.

Well I’ve been saved by the grace of Southern charm
I got a mouth like a sailor and yours is more like a Hallmark card
And if you wanna pick a fight
Well I’m gonna have to say goodnight
I don’t have to be hateful, I can just say bless your heart

Lambert’s other songs span a range of characters from a rough girl who burns down her house in the mega-hit Kerosene to a prodigal daughter in The House That Built Me.

Musically, Lambert’s band has more Texas in it than Appalachia, but they certainly manage to weave in a wide range of country styles. The New-New Country is pretty eclectic, with a fine sense of history but not much sense of place. It’s at home on the radio from Lumberton to Los Angeles.

The one constant is Lambert’s voice – strong, unvarnished and generally dry-eyed. She has a taste for irony and an ear for sarcasm.

Miranda Lambert will be in Cary at Booth Amphitheatre on Friday June 3, 2011 with Special Guests Josh Kelley & Ashton Shepherd. It promises to be an entertaining evening and a fine opportunity to see this rising country artist under the stars in one of America’s finest venues. Get tickets.

Chatham Square: Cary’s Gateway to the World
Scroll to top