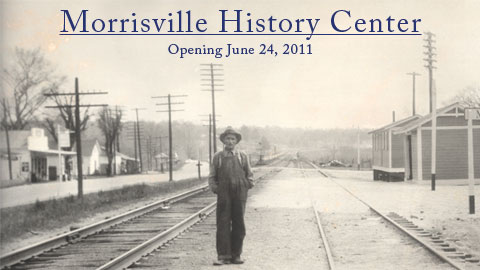 The History Center is being installed in the lobby of the existing Town Hall, and will tell the story of Morrisville.  The opening of the History Center is linked to the 150th anniversary commemoration of the Civil War, and the “skirmish” that took place in the town on April 13, 1865.

There will also be exhibits, live music, and refreshments. Volunteers
will reenact the event from 1861 when the men of Morrisville mustered in the yard
of the Williamson Page house before leaving to fight in the war.

Here’s the schedule for the event on June 24:

Following the videos, there will be a Question & Answer session with historian and videographer Ernest Dollar, who produced the videos.

Down on Main Street

In addition, the Town of Morrisville is inviting citizens to collaborate on the planning of Main Street by attending a workshop scheduled for June 30. Town staff will be there to present the different planning scenarios and get feedback and suggestions from the people of Morrisville.