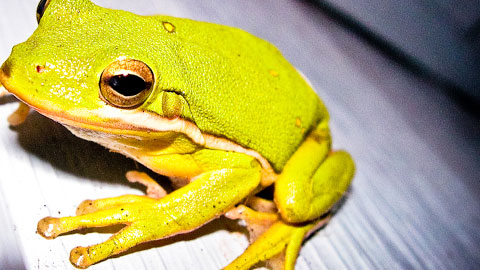 Cary, NC – Last weekend, I had neighbors sitting on my front porch. Fans going. Tikis blazing. It was about 10 pm.

I looked up from my rocker and my…uh… “infused” slice of watermelon.

Running across the street was a red fox. A big one. I swear. I took Biology in college. Hey, I’m the CaryCitizen wild animal guy. I have cred. I know a fox when I see one (I married one).

My “friends” quickly responded. “Really, Matt? Maybe it was a big rabbit?”  “Maybe it was the neighbor’s (name withheld) dog (who frequently uses my front lawn as her “relief area”)”. “A pink elephant?”

Anyway, the night went on (and on) and they finally left. I was cleaning up the glasses and plates and blowing out the torches.

All of a sudden there was a loud, frightening, urgent, nasty, foxy-sounding “barking” coming from behind the shutters of my house. I looked up making a “Home Alone” face. I whimpered a little I think.

I got my wits about me and thought “Barking Tree Frog”. Sure enough that’s what it was. Yes, there is such a thing. Don’t ask me how I know.

But on with the story on foxes.

We contacted Cary Police Animal Control. Turns out there have been a number of fox sightings in the Preston area of Cary.

Shelly Davis, Cary’s Animal Control Supervisor, told us: “Our department has received numerous phone calls of fox, raccoon, and even coyote sightings.  Many folks believe that if they see a fox or raccoon out during the day light hours they must be rabid.  That is not true, since it is breeding season and the mothers of the young are searching for food at all hours of the day.”

Ms. Davis advises that people need to know that if they leave dog food, cat food and even bird seed out – that will cause all kinds of wildlife to want to hang around their property.  She also old us that Cary Animal Control doesn’t remove “nuisance wildlife”.  They do pick them up if they are sick, injured or orphaned.

The North Carolina Wildlife Resources Commission offers this advice: “Foxes sighted in urban and suburban settings are not necessarily rabid or dangerous, and residents can take a few simple steps to avoid conflict with the animals. Simply seeing a fox is not a cause for alarm. Catching a glimpse of one can actually be a rewarding experience in that it provides an opportunity to witness one of North Carolina’s most adaptable species. However, people still should not approach foxes or fox dens, even if they seem harmless. If the fox makes a den for pups, do not disturb them. Do not approach, touch or feed the fox or its pups.”

By the way, those big rabbits have been eating my hostas. “Here, foxy foxy!”