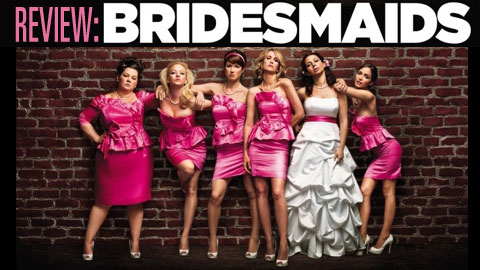 The past couple years have been filled to the brim with “bro” comedies thanks to Judd Apatow: The 40-Year-Old Virgin, Knocked Up, Funny People. But decent comedies about female friendships have been in scarce supply. Those that have been made were too often written off as chick flicks or romantic comedies.

Finally, with Bridesmaids, women get a well-written, smart comedy about the bonds between girls, one that doesn’t dismiss them as trivial. And for that we can thank Saturday Night Live star Kristin Wiig, who not only wrote, but also stars in Bridesmaids.

The movie features Wiig and SNL alum Maya Rudolph as best friends Annie and Lillian. Annie’s a failed bakery owner who gets used by men who don’t appreciate her, to say the least. Rudolph plays her best friend Lillian, who gets engaged and asks Annie to be Maid of Honor. Annie is initially honored and excited to help Lillian, until she meets Helen, another bridesmaid and Lillian’s new friend. She’s beautiful, put together, rich, and starts to step on Annie’s toes. She takes control of the dress fitting, the bachelorette party, and even the bridal shower, forcing Annie to confront her feelings about her best friend replacing her while the rest of her life is falling apart.

What makes this movie so unique is the complete gender role reversal. In most respected comedies, men play all the major roles while women get tiny bit parts with minimal lines and character development. In Bridesmaids, all the main characters are played by women, and not just pretty girls saying funny lines. These women are talented funny people. The movie stars SNL alums, as well as stars from The Office, Reno 911!, and Curb Your Enthusiasm. The men play such minor roles it’s almost laughable. We barely meet Lillian’s fiancée or any of the other bridesmaids’ husbands. The guy with the biggest role is Annie’s adorable Irish love interest Nathan Rhodes, a police officer who pulls her over, but even his character isn’t deeply written, and I wouldn’t have wanted it any other way.

It’s encouraging to see women in smart, hilarious roles, rather than just ones where they get to look pretty. It gives me hope that the glass ceiling of the boy’s club that is Comedy is being completely shattered.