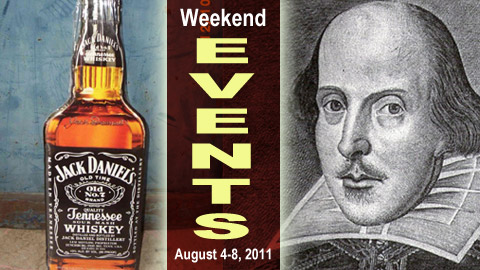 The Calendar is edited by Lindsey Chester.

Cary, NC – This weekend, the Calendar spans the far ends of the cultural universe with Shakespeare’s As You Like It at the Cary Arts Center  and the Beer, Bourbon & BBQ Festival at Booth Amphitheatre. Only in Cary.

The theatre scene is really starting to come together in Cary, with several companies and a classy venue in the new Cary Arts Center.

It all comes together this weekend with a collaboration between Applause! Youth Theatre and F.A.T.E., the Free Association Theatre Ensemble in a production of As You Like It by William Shakespeare at Cary Arts Center.

Expect the unexpected with Cary’s thespian teens teaming up with F.A.T.E. One of Shakespeare’s most popular comedies, it’s a romp in the woods looking for love for all the wrong places. It’s Shakespeare Reloaded.

Directed by Julya M. Mirro and Rachel Green with an ensemble cast.

The traveling roadshow of swine, sour mash and suds returns to Booth Amphitheatre on Friday and Saturday.

Free on Sunday is the Ritmo Latino Festival at Bond Park. Music, food, fashion and more for the whole family.

One of the biggest shows of the summer is on Monday, when Death Cab for Cutie takes the stage at Booth Amphitheatre.

More details can be found on the CaryCitizen Calendar of Events.

National Night Out in Cary
Scroll to top