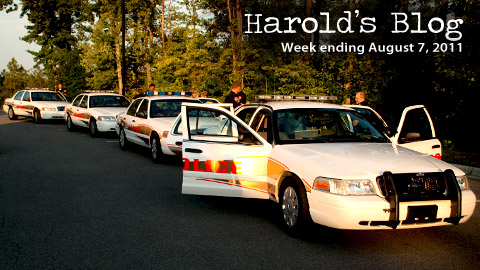 From the blog of Cary Mayor Harold Weinbrecht, covering the week through August 7, 2011. Photo by Hal Goodtree.

This week was busy with events and a lot of political meetings. Usually this time of year is a little slow but with the campaign in full swing I will remain busy until the end of the year.

Monday was consumed by political meetings and working on the campaign. I had dinner with one person who is relatively new to the area. He wanted to get involved locally and participate in the Cary elections. I am looking forward to his support and help.

Tuesday started with a debriefing of the proposed ICE (Immigrations and Customs Enforcement) facility next to West Park.

Staff has done an extensive investigation on the process of this proposal. While there was communication between representatives for the property and town staff months before it was widely known, management and council were unaware. Even though there probably should have been better communication, it is important to understand that the ICE officials are supposed to contact town officials. They have publicly admitted their mistake and have pledged their cooperation.

Since the plug was pulled on this proposal I have received communications from all the decision makers assuring me of their commitment to cooperating with the town of Cary.

In the review of this issue it is very impressive how we went from knowing nothing about a federal proposal to shutting it down in a matter of a couple of weeks. This was the result of dedicated people from the neighborhood, the town, and especially Congressman Price’s office.

At the conclusion of this debriefing and I was satisfied that staff has taken necessary steps to improve all future interdepartmental communications.

Tuesday night was National Night Out in Cary and across the nation. The National Night Out campaign involves citizens, law enforcement agencies, civic groups, businesses, neighborhood organizations and local officials from over 15,000 communities from all 50 states, U.S. territories, Canadian cities and military bases worldwide. In 2010 over 37 million people participated in National Night Out.

My first stop at National Night Out was in Lochmere. Over 400 people attended the event at the Swim and Tennis Club. There was one fire truck manned by several fire fighters, a police motorcycle, and over a dozen officers. The officers, firefighters, and me talked with residents and answered questions. I shook hands and had conversations with people for about 45 minutes. All that I talked with were happy with Cary and felt safe. When asked about any issues or concerns they talked about growth. People wanted a balanced approach to growth.

My second stop at National Night Out was in Cary Park. There were around 50 folks at this gathering. The Cary Park location also had a fire truck, several police cars, and a K-9 unit. In addition to talking with most of the citizens I was able to talk with firefighters, police officers, and the K-9 officer.

In my talk with the K-9 officer he explained that Cary had a new police dog in transit from Europe. He will be training the new dog and hopefully it will be commissioned later in the fall.

I haven’t heard the final numbers for National Night Out in Cary but believe it was a great success. Even though Cary is the second safest city in the nation we must all do our part to help keep us safe including reducing crimes of opportunity. The great showing from Cary citizens makes me believe that they are in agreement.

Wednesday I attended the commissioning of five new Cary police officers. Officers Bird, Culin, Hanak, Jones, and Newport were joined our great police family with other officers, town employees, family, and friends in attendance. I was honored to give just a couple of brief remarks including how proud I am of our department and its administration.

Thursday was another campaign night as I met with strategists.

Saturday morning I attended an Eagle Scout ceremony for Jeff Woodard. I was honored to be a part of his ceremony. Unlike most scouts who obtain the Eagle rank around 18, Jeff has become an Eagle Scout at 15. It is my hope that he will take these leadership skills and help his community.

The week ended with another campaign related event on Sunday. These will become more frequent as we get closer to October.

Emails from staff this week included a link to all development projects. To see what is going on in town see:

Emails from citizens this week included complaints about softball fields for seniors, the cancelled Temptations show at the amphitheater, and sewer service outside town limits.

Staff also notified council this week that they are meeting with property owners about a study to have a railroad bridge at Harrison Avenue.

Since this is just in the study stage, staff doesn’t believe there’s enough information to warrant or develop a mass announcement. Eventually there will be news releases, Bud, etc. especially as opportunities for public input are scheduled.  Staff has a communications plan and is beginning activities to share information this week.

They have a web page available at

Feel free to forward any questions you receive to staff or the web page.

Staff also announced that they have procured the necessary equipment and plan to install the Wi-Fi in the train station downtown on Monday, August 22.

Next week’s events include a council meeting, a leadership dinner, and the dedication of the Cary Arts Center.

Well that is all for this week. My next post will be on Sunday, August 14th. Please feel free to email me with a comment. Email all Town of Cary questions or comments to Harold.Weinbrecht@townofcary.org. Email personal comments to augustanat@mindspring.com.