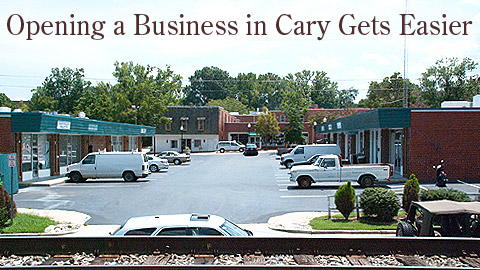 Cary, NC – At a Heart of Cary meeting a couple of months ago, public frustration at a cumbersome Inspections and Permitting (I&P) process boiled over in front of senior town staff and officials. Since then, real progress has been made on the issue.

CaryCitizen spoke with Town Manager Ben Shivar about changes already in place and others still to come for I&P.

Why I&P is Important

I&P the gateway to opening a business in Cary. Put simply, if the process is lengthy, expensive and frustrating, it discourages investment in Cary.

Ben began by explaining a new pilot program downtown that joins all the inspectors in the permitting process into one team – electrical, building, mechanical and plumbing.

In the pilot program, the team inspects a property all together. No conflicting information or crossed lines of communication when everyone is in the room at the same time.

Another advantage to the program is that geographically-assigned teams provide familiar faces within the community. This certainly leads to greater accountability and understanding.

The Fire Department component of the inspection team is still to be arranged, according to the Town Manager.

Shivar said he would study the results of the pilot inspection team downtown, tweak where necessary, and plans to roll out the program across the entire town when it’s ready.

Ben said that Town has rolled out a survey to collect data on every customer contact I&P has, which last year was over 60,000.  That survey went live last week.

The intention is to pinpoint hotspots that need special attention.

Ben also put the problem into perspective for me. The Inspections Department, headed by Russ Overton, has 46 people and performs about 63,500 inspections a year. A large percentage of those inspections are for ordinary items like water heaters.

But even though the numbers of were small, Ben recognized the importance of I&P when it comes to business openings. Whether it’s in downtown Cary or out on the edge of town, we need a fair, transparent and efficient process to attract business and thrive as a community.

Progress is being made.

Hospitals: There’s an App for That!