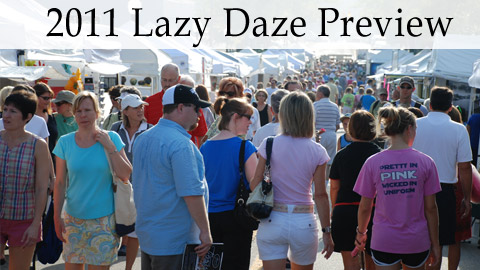 Cary, NC- Lazy Daze is a tradition in Cary, spanning 35 years from the first event brainstormed by Cary resident Jerry Miller, whose drawing is the official symbol of the event.  This year, Jerry Dolls make their debut along with other new attractions.

Thirty five years is a long time to carry on a tradition and not go stale. But every year Joy Ennis, Town Of Cary Festivals Director, and the volunteer Festivals Committee come up with ideas to keep things fresh- even if the weather is 100 degrees!

This year 385 artists from 16 states have been selected to be part of this juried festival. Joy said she “Hopes the weather cooperates” because in 2008 a hurricaine loomed and in 2009 the day was rainy on and off. Last year the festival granted area 33 non- profit groups a total of $35, 000 , a direct result of a record turnout.

Joy added that the inclusion of “the new arts center opens up a whole new avenue because artwork really represents the festival”.

Joy Ennis told me the committee has commissioned five “Jerry Dolls” that will be hidden all around the festival area. If people find all five, they will be registered to win prizes. Think “Where’s Waldo”- Cary-style. The Jerry dolls resemble the Jerry Miller drawing used as the Lazy Daze logo.

If you like competition, check out the timber and ice sculpting area where artists will use chain saws to make their creations which will then be judged.

Feel like playing chess, Harry Potter style? Giant game board for chess and checkers will be set up for play.

Artist’s  demonstrations have always been a part of the festival. This year, with the opening of the new Cary Arts Center, those demos have been moved inside. Seven groups will be highlighting their skills which include: Capital Quilters Guild, the Gifted Hands Chapter of the Embroidery Guild of America, the Woodturners Guild of North Carolina, Cary Clay Cooperative, NC Society of Goldsmiths, Carolina Designer Craftsmen, and Cary Players.

Cultural Arts Row will be located beside the Arts Center, where groups will hand out information about their work.

An Artist Shopping CD is available. All categories and listings of artists are on the Lazy Daze webpage under Shopping List

Performance artist the Silver Lady will be back. Dressed in period costume and painted silver head to toe, she stands as still as a statue until you place a donation in her bucket.  Then she moves to accept it, and returns to her still state.

Look for these other roving entertainers:

Kids World is back and will offer food and scheduled entertainment. The misting tent is located here for cooling off the family! Kid’s World is located at the corner of Academy and Park Streets just across from the Cary Public Library and is brought to you by Carolina Parent Magazine.

Fidelity Plaza will host live music including the Cary Town Band, high school bands and the Grass Cats. Check the schedule. The second stage is located in “Lazy Land” and will feature Applause! Theater, International Ballet Academy and others.

Each year the festival gets bigger and has spread from the main Academy Street area, to encompass food stalls in Ashworth Village, and artists booths extending down East and West Chatham Street.

Lazy daze is always held in Downtown Cary, on the last Saturday of August- this year August 27th from 9-5pm.

Events coverage on CaryCitizen is sponsored in part by Frantz Automotive.

Belk Bulks Up in Cary

Food: All Dressed Up
Scroll to top