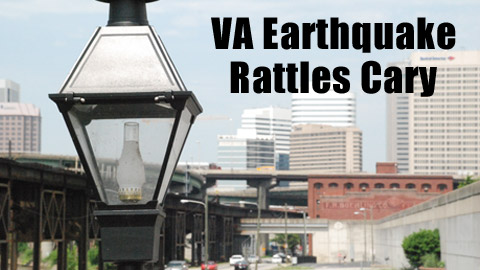 Cary, NC – Just before 2:00, I was sitting at my Jefferson desk pounding out something on the keyboard. That’s what publishers do – pound the keyboard.

Suddenly, my whole office sounded like it was rattling. I thought to myself, “seriously, am I hitting the keyboard that hard?” I stopped typing. Stuff was still shaking a little.

I assumed it was my wife or kids messing around downstairs. Maybe the cloths washer was unbalanced.

I went back to pounding the keyboard.

Within moments, Twitter lit up. Apparently the tremor was felt all over Cary.

The 5.9 magnitude quake occurred at 1:50 pm with an epicenter about 35 miles northwest of Richmond, VA. Buildings were evacuated up and down the East Coast, including the Pentagon outside Washington, DC and City Hall in New York. People reported feeling the quake as far north as Maine.

One Twitter user in NYC reported reading about the quake fifteen seconds before it hit the Big Apple:

I saw the tweets from DC about earthquake, then 15 seconds later felt it in NYC. Social media is faster than seismic waves! – JesseCFriedman – via twittermedia

According to the Richmond Times-Dispatch, the North Anna nuclear power plant, close to the epicenter of the quake, lost electricity. The utility manually shut down the facility’s two reactors.

According to Dominion Power, emergency diesel power kicked in and no damage was reported.

Did You Feel It?

Where were you when the quake hit? Did you feel it?