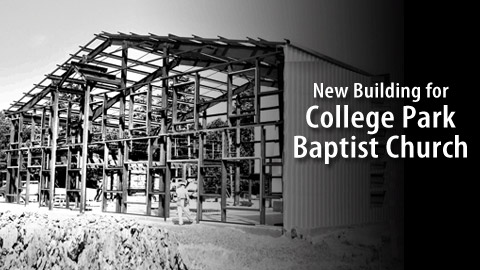 Cary, NC – College Park Baptist will be kicking off a new era with their Grand Opening on October 23, at 910 Twyla Road, in a part of Cary off Green Hope School Road that has changed and grown incredibly since Pastor Matt Walker began planning for this day in 2003.

From the Marriot Hotel to a Strategic Location

The church started in 2003 in the Marriott Hotel off of Miami Blvd. In June of that year the church relocated to NW Cary Pkwy where it has been for the past 8 years. In 2008 the church purchased property on the corner of Green Hope School Rd. and Twyla Rd. just west of Highway 55. The church was named as such because of the nearby universities.

The church is strategically located to serve the growing communities in western Wake County. A planned intersection off of I-540 is being constructed nearby and will provide the church access to this major highway.

“The music is sacred, not a blend of rock music with Christian lyrics. The church emphasizes the church family concept. There are no plans for College Park to become a mega-church,” Pastor Walker told us. “Our church population is also distinctive in its diversity with ages ranging from early 80’s to newborns and peoples from different nations.”

Pastor Matt Walker and Dr. Bud Calvert, an early supporter, will be the speakers at the event. Children will be having their own special program that will include puppets and a time of teaching from the Bible, music will be provided by the church choir.

For more info go to www.collegeparkministries.org.

Tips For Athletes from the Mudcats Team Doctor
Scroll to top