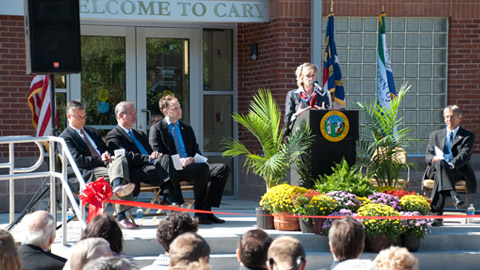 Cary, NC- The new Cary Depot has been operating since Labor Day, but the ribbon cutting ceremony was held Monday, October 3 amidst much hoopla.

The station began operation 2 months early, with construction completed in 10 months, coming in $100,000 below the original budget. 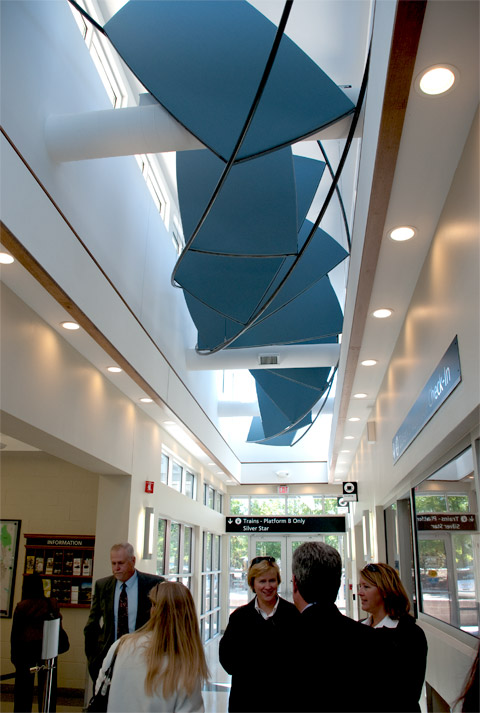 Celebration at the Depot

The weather was crisp and clear for the ribbon cutting. A standing room only crowd looked on while the Cary Town Band played Carolina on My Mind. A contingent of Police and Firemen presented the colors. It was a small-town feel for an event that can change Cary’s future. 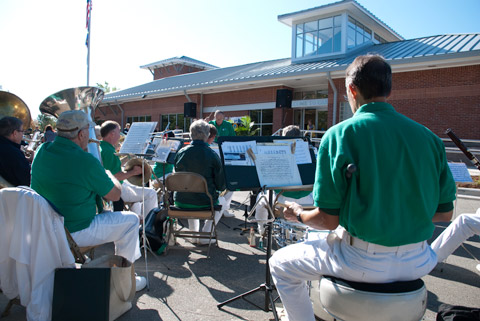 Nina Scholsberg of NCDOT  introduced the speakers and stated that the station “symbolizes another step forward” in North Carolina’s progress in job creation and helping to build sustainable communities. She spoke about the partnership necessary to bring about a project of this scale and lauded Cary Mayor Weinbrecht in his efforts to put partnerships together.

‘The station is an example of how great things happen with a shared vision,” said Cary Mayor Harold Weinbrecht. 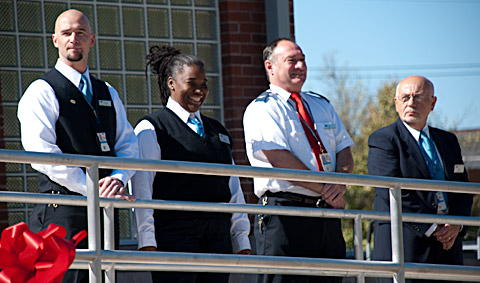 Frank Page, the town’s first railroad man, would have been very proud.

This full-service rail station had its ground breaking 1 year ago on October 25, 2010. In that time, mass transit has been gaining importance in the region.

Mayor Weinbrecht highlighted some milestones that included Cary’s C Tran bus service hitting its one millionth passenger. Last year 38,000 passengers rode the trains from Cary. NCDOT expects that to grow 15% . The station has already exceeded the expected ridership since its unofficial opening one month ago. North Carolina’s rail use led the nation at 46%, Cary’s rail use increased 105% over 5 years. 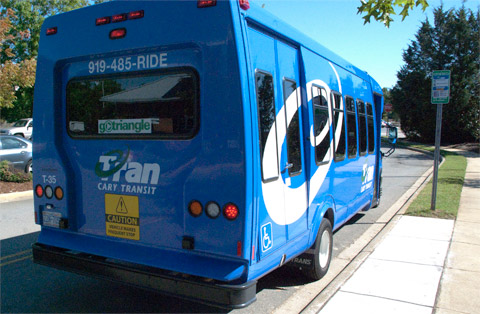 The upgrades in Cary and 17 other stations in our state were funded, in part, by the US Recovery Act, $8 billion dollars for states to improve transit infrastructure. North Carolina was allocated $540 million. High speed rail in the Southeast is expected to spur growth in development and jobs and it’s coming to Cary. Trains are slated to travel 110 mph from Raleigh to Richmond and Washington DC.

Deputy Secretary Morris said that it’s important “to leverage public dollars to facilitate the kind of growth you want to see.”

A Boost for Downtown

The opening of the rail station adds another key feature to invigorating our Downtown area.

Development along Academy and Chatham Streets continues in a chain of events that includes the new Cary Arts Center,  soon-to-open Cary Theater, and the town’s purchase of several other soon to be developed properties along both streets. 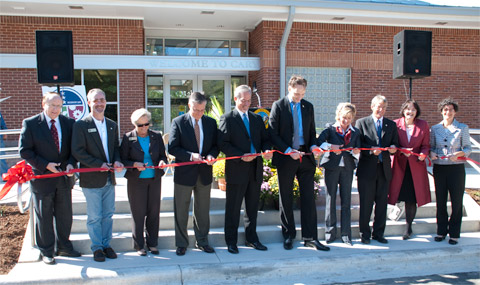