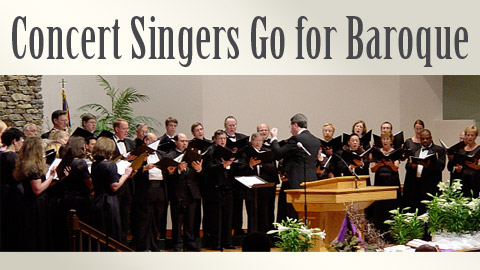 Cary, NC-The Concert Singers of Cary will be performing an exciting early work by Georg Frederick Handel, Dixit Domimus (Psalm 110)in a performace they dub “Italian Vespers”. The work will be accompanied by a string ensemble of Baroque players using copies of the 18th century instruments used for the piece.

When people hear of Baroque era composer Georg Frederic Handel they usually think of his oratorio Messiah, written during the height of the composers prolific career. But in this modern age of movie prequels and reboots one might wonder what the young Handel was like and what he was doing in his emerging years.

The Prequel to Messiah

Thirty seven years before the debut of Messiah, the brash twenty year old Georg Frederic Handel was studying the new concertato style of composition in Italy, then the virtuosic center of the Western world. For many young people of ambition who want to flaunt their abilities the result is often a product of overreaching.

In 1705 the young Handel wrote Dixit Dominus (Psalm 110), designed to flaunt his ability to write elaborate and technically challenging music for both vocal and instrumental performers. It is an exciting and fascinating work, written for five part chorus. It is highly challenging with complete disregard for the technical demands placed on the performers, especially the singers. Conspicuously missing is any opportunity for the singers to breathe. While the work lacks the refinements of his later compositions, the florid passages and pyrotechnic vocal lines  illustrate the Baroque musical tradition at its best.

Joining them will be eight singers from the newly formed professional singers group called The Cary Choral Artists, an exciting new initiative for the Concert Singers organization which has entered their 21st season of Concerts.

“We’re excited to be able to offer our community access to some of the areas fine professional singing talent” says conductor and Artistic Director Lawrence Speakman who is himself a professional singer and serves as a member of the Choral Artists on works that do not require a conductor. “These singers not only enhance our performances but also serve as section leaders and vocal instructors to our amateur singers” Speakman said.

In addition to serving as soloists and section leaders on the Handel Dixit Dominus, the Choral Artists will present two works on their own in the first half of the program, Miserere (Psalm 51) by Francesco Scarlatti and J.S. Bach’s motet Singet dem Herrn ein neues Lied (BWV225).

Joining the singers will be a string ensemble of Baroque Period players, playing on instruments that are copies of 18th century string instruments providing a leaner and gentler sound than their modern equivalents. Harpsichord and portable pipe organ will also be part of the ensemble.

Since their 1991 debut, Cary Concert Singers ‘Artistic Director Lawrence Speakman has planned concerts providing a wide-open perspective for music lovers. In recent years they have explored music from swing, folk, Latino, madrigal, opera, spiritual, and many other traditions, and have performed music from five continents.

Other upcoming performances include a Holiday Pops concert November 24 and 25th and the Heart of Cary Holidays celebration on December 10.

Gardening: Of Pansies and Violets