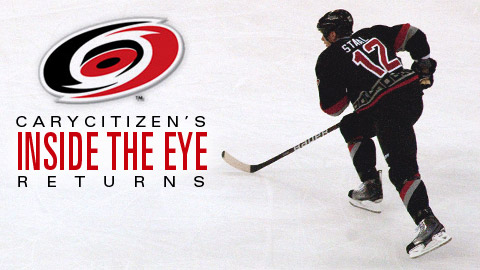 Story by CaryCitizen’s new Carolina Hurricanes sportswriter, Bob Fennel. He’s the only member of the press corps that wears his Canes gear to the games. ‘Nuff said. File photo by Hal Goodtree.

Cary-lina, NC – The Canes faced off against the Ottawa Senators on Wednesday, October 25 at the RBC.  They skated away after having been beaten in a heartbreaking 3-2 shootout loss.

The Carolina Hurricanes are now in the middle of the Eastern pack at 3-3.

Brandon Sutter improved on his already impressive face-off winning numbers from the initial drop of the puck. The Canes were off and running early in the first period.  Sutter, along with line mates Jiri Tlusty and Pat Dwyer were matched against the high scoring Jason Spezza line and did a great job of shutting the Senators down early while still putting up some impressive offensive numbers.   Senator Nick Foligno had what could have been a back breaker when he had a point blank shot that Cam Ward stopped with a quick pad save.

Zach Boychuk, called up earlier in the day, had an energy-filled first period displaying his speed and NHL quality stickhandling skills.   The line of Boychuk-Tim Brent- Brett Sutter were relentless in their shift with forechecking, keeping the puck in the defensive zone their whole shift. The Canes had 2 first period power plays that added to the first period lopsided shot totals: Canes 15, Sens 5.

Sens coach Paul MacLean must have had some choice words in between periods and the Senators opened the second period with renewed energy on offense.

The first 7 minutes found the Canes on their heels. Zenon Konopka took a pass from Sergei Gonchar, skated alone on the left wing and nailed and hard shot past Ward at 6:30 . Moments after what appeared to be a Senator penalty tackling Jeff Skinner, Jay Harrison was called for the Canes’ only penalty on what appeared to be a weaker hold than the Skinner take-down.

Ottawa’s potent power play, 3rd in the league at 32%,  was tough to stop.  After a shot by Colin Greening that was initially stopped by Ward, the puck trickled behind him with Spezza’s tip of his stick touching the puck in just as the Carolina defense was about to clear it. Shots after 2 – Canes 22, Sens 17. Also after 2: Senators up 2 to zip.

Wanting to forget the second period, the Canes came out early in the third where they left off in the first.  Both Eric Staal and Brandon Sutter used their size advantage in forechecking to gain momentum for Carolina.  The Canes could have cut the lead in half with a power play goal but failed to connect on the Zach Smith holding penalty at 8:14.  Alexei Ponikarovsky seemed to try to ignite the Canes using his size as a physical presence in both ends of the ice.  It must have worked as a short time later the Canes got a goal by Tuomo Ruutu on pure hustle. On a dump in by Harrison that could have gone for an icing call, the puck slid through the crease with Ruutu skating hard, back handing the puck over the shoulder of goalie Craig Anderson at 15:08.  Senators lead 2-1.

With 2:37 left to play, Skinner drew a holding penalty and the Canes sent out the first power play unit. Stall had a strong move on the faceoff winning the pack back to Jamie McBain.  McBain skated to mid area just inside the blue line wristing a shot towards the goal.

Skinner was being manhandled in front of the goal but somehow managed  to redirect the puck into the net with only 6 seconds gone in the power play sending the game into overtime.

Overtime had the Canes pouring it on with a 6-1 shot advantage and clearly had puck possession for most of the 5 minutes but could not put one past Anderson.

Sharp shooter Jason Speeza scored the only goal of the subsequent shootout giving Ottawa the win.

Next up – Blackhawks on Friday, October 28.