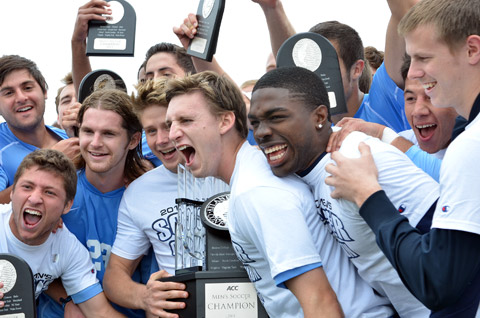 Story by Rob Daniels and Steve Philipps of the ACC. Photo by Chris Adamczyk for ACC.com.

Played Great in the Cold Semi’s

Leading up to the Sunday victory, the UNC team played the Virginia Cavaliers in some bone chilling temps Friday. With wind chills into the 30s and falling, the top-seeded Tar Heels defeated Virginia 1-0 in the ACC Tournament semifinals when Schuler finished a well executed sequence initiated by Enzo Martinez and continued by Rob Lovejoy less than two minutes into overtime. UNC (16-2-2) had reason to believe it wouldn’t come to this, having controlled play for almost all of regulation. By itself, of course, outshooting the opposition 21-4 doesn’t promise anything in this game, and getting frustrated doesn’t particularly help.

“You can’t dwell on your misses,” Lovejoy said. “You have to think you’re going to get the next one and put it away.”The fourth-seeded Cavs (12-7-1) got to WakeMed Stadium with a 4-3 overtime win over No. 5 Wake Forest on Tuesday. The game was the tournament’s highest scoring quarterfinal since 1997, and coach George Gelnovatch said it had a cumulative effect that was tough to counteract against a powerful UNC club.“Congratulations to Carolina, a good team that played hard and well tonight,” Gelnovatch said.

Boston College, the number 7 seed, bested No 2 Duke in the semi-finals Friday in a closely matched game , 2-1 with each team shooting 10 shots on goal.

If the Eagles’ ranking within this exceptionally competitive fraternity suggested they were longshots to survive, their play did not. “The truth is the Eagles would have been seeded first if they had beaten North Carolina in the regular-season finale. While falling to No. 7 in their own league, they stood seventh in all of Division I (203 teams worth) in the RPI dated Tuesday.

But number one seed UNC- got the best of the Eagles on a beautiful fall day Sunday.

Ben Speas, who had scored twice all season before Sunday, delivered two goals and assisted the third as top-seeded UNC defeated Boston College 3-1 to claim the program’s third ACC Tournament championship. Speas assisted Carlos McCrary and knocked in a 40-yard free kick in a five-minute span of the first half for the Tar Heels (16-2-2), who have allowed only two goals in an ongoing six-game winning streak.

Speas was named MVP for his goals and 3 points contributing to their victory. “I’m very proud of our team because Boston College was an outstanding team and they’re going to do very well in my opinion in the NCAA tournament,” said UNC’s Carlos Somoano, who became the first coach to win the conference title in his first year on the job. “They gave us a great game today. We hadn’t had to deal with a team coming at us that much this season.”

The Eagles, seeded seventh in the tournament while rated seventh nationally in the most recent RPI, made a frenzied charge, generating four solid scoring chances in the final 20 minutes. North Carolina goalkeeper Scott Goodwin repelled three of them with solid saves. Both teams can reasonably anticipate first-round byes in the NCAA tournament, for which the pairings will be announced Monday. 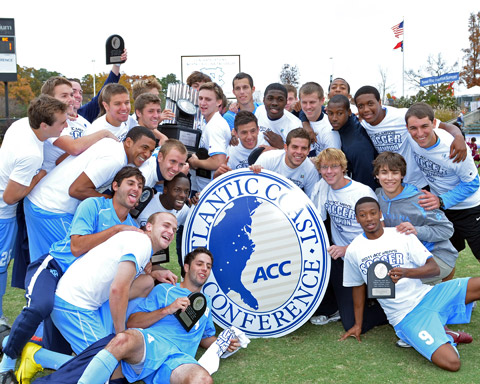 UNC, which claimed its other titles in 1987 and 2000, didn’t trail in the tournament. It jumped in front on Sunday when Speas took the ball on the right side of the box and crossed one for Carlos McCrary, who took great care to head it off the turf and in with 7:41 left in the first half.

It became 2-0 in short order on an unconventional play. Speas admitted he was simply trying to play his free kick into the box for a teammate. Any teammate. But BC goalkeeper Justin Luthy appeared to mis-time his jump, and he was unable to snare the ball.

“On those long ones,” Speas said, “you want to keep it on goal just in case something like that does happen.” The Eagles unsuccessfully sought a call of interference, believing a Tar Heel had improperly obstructed Luthy’s path to the ball.

The necessity of pushing forward created space for North Carolina’s third goal, a breakaway that Speas finished off a feed from Billy Schuler less than three minutes after the Eagles had gotten on the board. Schuler, the team’s leading scorer, was limited to 40 minutes over the final two games by a leg injury, but he made his time count. He delivered the game-winner in Friday’s overtime win over Virginia and got Sunday’s assist in his third minute on the field.

“His presence on the field changes a lot of things,” midfielder Enzo Martinez said. “And his numbers speak for themselves.”

Although he didn’t enjoy seeing it, Kelly appreciated Schuler’s excellence.

“When Billy’s healthy,” Kelly said, “he is a problem.”

North Carolina made it a special day for outgoing athletics director Dick Baddour, who promoted Somoano from assistant coach in the spring. Baddour attended with his successor, Bubba Cunningham, who begins his tenure on Monday.

In prevailing at WakeMed Stadium, UNC achieved something relatively rare. It became only the eighth team to win the ACC Tournament after claiming the regular-season title outright, and it did so with an entirely new back line in which Somoano put his total trust.

Armed Robbery at the Scotchman
Scroll to top