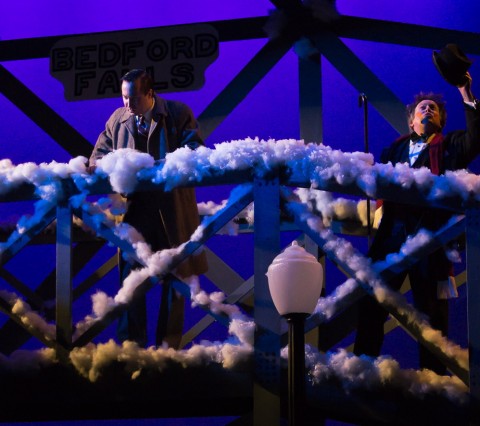 Cary, NC- The Cary Players rang in the Christmas season this past weekend at the Cary Arts Center with the stage version of the holiday chestnut “Its a Wonderful Life”.

The tale of George Bailey has been a perrenial favorite since Frank Capra produced the film starring Jimmy Stewart and Donna Reed in 1946.

The story begins with George Bailey (played nobly by Jon Karnofsky) about to jump from a bridge thinking he is “worth more dead than alive” when he believes he is facing prison and financial ruin. “Angel second class”, Clarence Odbody (Lyman Collins in a fanciful turn),  tries to stop him. Much like A Christmas Carol, Clarence takes George back through his life to point out all the positive impact he has had on others.

George regrets never leaving his hometown, and thinks he has not accomplished his dreams. Now with certain bankruptcy facing him, he believes his life has truly been a waste. It is up to the angel to prove him otherwise. George exclaims “I wish I’d never been born!” at which point Clarence turns the scene to how life in Bedford Falls would be if George had never lived. A brother he’d saved, would have died instead of being awarded the Congressional Medal of Honor, bank loans he made would not have happened, and folks would have remained in slums not homes.

On Christmas Eve George comes to realize his life does matter. And in the end, all the people whose lives he has helped, come to his aid with money to bail him out of his financial woes.

Director Jaret Preston, has done a great job with casting. Lyman as Clarence is hilarious speaking up to Heaven. Jon Karnofsky as George has a tough act to follow in Jimmy Stewart, but does a fine job. Another standout was Fred Yaffe as Henry Potter whose aim is to take over Bedford Falls. Several characters have no lines, but managed to steal the scenes in which they appeared. I especially liked Bob Grannon’s silent “goon” as Mr Potter’s sideman.

The season wouldn’t be complete without some feel good productions and this was among our area’s finest. It is a tale of hope, and common decency among neighbors and friends. Always welcome this time of year to remind us of how much we do matter.

The Cary Players this season are adapting films to the stage. Their next production in February will be Agatha Christie’s “And Then There Were None”.