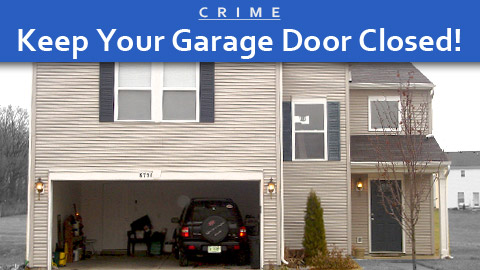 Cary, NC – Thursday morning, a man in Cary was robbed at gunpoint and duct-taped to his bed. Fortunately, Cary Police arrested the suspect within hours.

But the chilling part – the robber entered the home through an open garage door. I always leave my garage door open when I’m home. How about you?

Another Quick Arrest for Cary PD

For the full story of Thursday’s events, we go to information from the Town of Cary:

The Town of Cary Police Department has arrested a suspect in an armed robbery and home invasion that took place this morning in the MacGregor Downs subdivision in Cary. James Edwin Deetz, 26, is charged with felony breaking and entering, kidnapping, robbery with a dangerous weapon, and larceny of a motor vehicle.

This morning, Cary police received a report of an armed robbery at 9:35 a.m. Deetz entered the home of the 51-year-old Cary resident through a garage door that had been left open and approached the resident, first pointing a gun at him and then taking him to a bedroom and duct taping him to the bed. He then took the homeowner’s wallet and keys and left the scene in the victim’s vehicle. The victim, who was not hurt during the incident, was able to free himself and called police from a neighbor’s home.

As part of its investigation, Cary Police alerted other law enforcement agencies to be on the lookout for the stolen vehicle; the Wilson Mills Police Department located Deetz in the victim’s black Cadillac STS on Highway 70 near Buffalo Road and took him into custody.

“This appears to have been a crime of opportunity, resulting from the suspect seeing the open garage door,” said Rhyne. “We can’t stress enough the importance of citizens locking their vehicles and closing their garage doors after them when they enter their homes.”

Garage burglaries and automobile-related thefts are Cary’s most occurring preventable crime. While there isn’t anything illegal about leaving garages or car doors open or leaving items in clear view, doing so makes it very easy for criminals to steal valuable things like tools, food, GPS units, wallets and purses. In 2008, the Town of Cary Police Department launched its outreach program “Operation Hello Neighbor” to educate citizens on the risks of open and unlocked doors.

Cary is the wealthiest municipality in North Carolina. Let’s be smart. Those who want to commit crimes aren’t driving out to Roxboro.

Great job today by the Cary Police. Now, we all need to do our part to make the town a safer place.

I guess I’ll be closing my own garage door from now on.