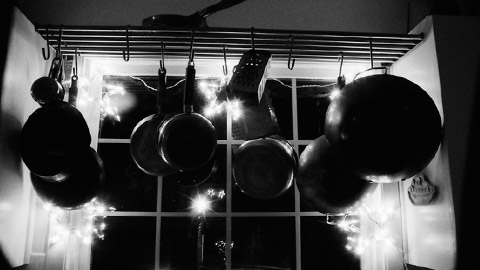 When I was a kid, New Year’s Eve meant sleeping over at a friend’s house, staying up very late, and physically assaulting cookware. At midnight, whoever was babysitting would send us out onto the driveway and have us hit pots with wooden spoons. Several new years were rung in to the sounds of some sort of saucepan violence. As a result, it is possible that various cooking sets dreamed of one day having a celebration of their own where they beat small children.

We were never told why we were supposed to celebrate the new year this way. In the movies people blew on kazoos and threw confetti into the air. I never saw a film where people dressed in tuxedos and evening gowns suddenly went medieval on a collection of non-stick stock pots.

It is possible that this tradition was first begun decades earlier by disgruntled housewives, women who snapped when their husbands asked them to make more casserole. “If I have to cook one more (bleep) meal for that (bleep), lazy, (bleep) idiot …”

Or maybe this all started when a band’s drummer had a little too much to drink in between sets and accidentally started hitting items on the buffet table. “Should we tell him that he is playing  soup tureens?”

Admittedly, it is not a tradition I tried to keep up when I moved on to high school and college.

“No thanks. I’m going to stay home and smack away at an omellette pan.”

And now that I am a dad, I have yet to tell my son to hit pots. Instead it will just be one of those childhood memories that I look back on and think, “Maybe that’s why I ended up in therapy.”

Inside the Eye: Staal Leads Canes Past Leafs 4-3 In OT
Scroll to top