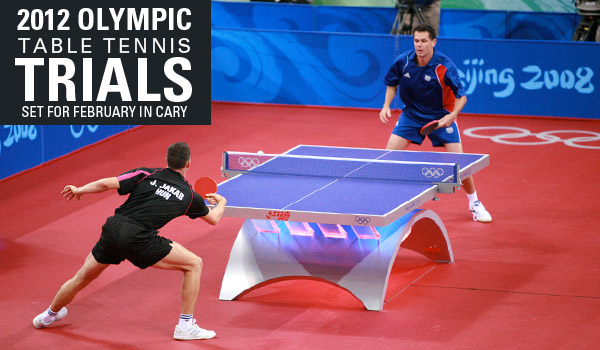 Cary, NC – Can’t make it to London for this year’s Summer Olympics? No problem. Cary will be hosting its first-ever Olympic Trials for the U.S. Table Tennis Team starting on February 9.

The Road to London

Tabel Tennis is an electrifying and athletic sport. Sports fans will have a front row seat at Bond Park February 9-12.

Here’s a video from USA Table Tennis that shows highlights from the 2011 US Nationals. This match features Timothy Wang vs Samson Dubina.  You can also watch it on YouTube.

The U.S. Olympic Table Tennis trials in February will determine the make-up of the American team. A second tournament in April will determine which team from North America makes it to the 2012 Olympics.

For the nation’s top table tennis athletes, the road to London starts in Cary, NC.

Almost a decade ago, the Cary Table Tennis Association approached the Town about supporting their Butterfly Cary Cup Championship. The event draws competitors and spectators from around the world. This year, $18,250 in prize money is up for grabs.

One thing led to another, and now Cary is hosting the U.S. OIympic Trials.

The 2012 Olympic Trials and Qualifying Tournament are co-hosted by the Cary Table Tennis Association, the Town of Cary, Greater Raleigh Convention & Visitors Bureau, and the Triangle Sports Commission.

Scott Dupree, Vice President of the Greater Raleigh Convention & Visitors Bureau said, “The U.S. Table Tennis Olympic Trials is yet another signature sporting event for the Town of Cary and strengthens the Town’s growing reputation as a superb amateur sports destination. The Trials are sure to bring plenty of national and international attention to Cary and the entire region.”

“Cary has proven itself as an excellent host for our sport with 10 years of the very successful Cary Cup. Several of our national team members have played in the Cup and praised the event. Of course dating back to my own participation in the U.S. Olympic Festival in the Triangle in 1987, the region has demonstrated its organization of, and love for, Olympic sports, and that factored into our decision as well.” – Mike Cavanaugh, CEO of USA Table Tennis

Package price of $30 for all four days also available.