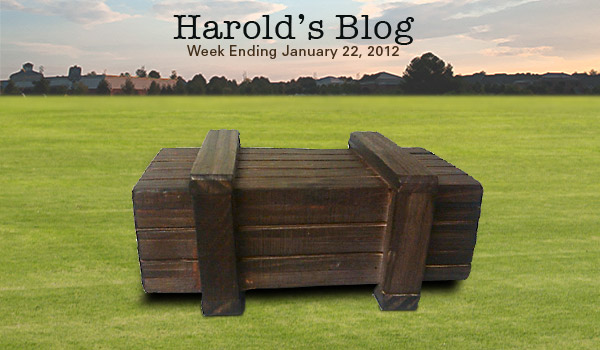 From the blog of Cary Mayor Harold Weinbrecht, covering the week through January 22, 2012. Photo collage by Hal Goodtree.

Cary, NC – This week consisted mostly of three events: the Mayors Association Meeting, a meeting of the Capital Area Metropolitan Planning Organization (CAMPO), and a council work session on downtown.

The Mayors Association met on Monday and all twelve mayors of Wake County were present (which happens maybe once a year). Two new mayors were present at this meeting; newly elected Mayor McFarlane of Raleigh, and Mayor Hinnant of Wendell. We discussed several interesting topics and the following were some of the notable points:

There are several municipalities with various mailing addresses that cause confusion. For example, there are people in Cary with Raleigh, Apex, and Morrisville mailing addresses. The mayors would like to reduce these.

There may be three referendums on the ballot this fall including the ½ cent sales tax for transportation, a school bond, and municipal bonds.
Speaking of schools, the mayors decided to set up a meeting with the school board members. The mayors would like to discuss their capital project plans and their reassignment plans. School board members have indicated that they are interested in meeting the mayors again. We have only had one other combined meeting which was a breakfast meeting in Cary a few years ago. Our meeting lasted about two hours. The mayors will have an outing in February and next meet in March.

Tuesday I met with the town manager for a little over an hour. We mostly compared notes on the council/staff retreat the previous weekend. We both believe the retreat was very beneficial and much more was accomplished since it was out of town. If we can make sure to keep the costs down, as we did this year, we will look at holding it out of town in the future. Another topic we talked about was the Joint Land Use Plan with Chatham County. Public Hearings on this plan will be held in the near future for both boards.

Wednesday I attended the monthly meeting of the CAMPO TAC (Capital Area Metropolitan Planning Association Transportation Advisory Committee) on behalf of the town. This has almost 30 representatives from neighboring towns and counties. We make decisions that will prioritize transportation improvements for the region. This month’s agenda can be found at http://www.campo-nc.us/TAC_Agenda/2012/Agenda-TAC-2012-01-18.pdf. Items of note for Cary include a proposal that the Locally Preferred Alternative (LPA) for the Wake-Durham Commuter Rail project be approved prior to any action on the Wake Transit Financial Plan. CAMPO decided to send this to the technical staff for their review and recommendation. Another item of interest was the Cary Parkway extension which was referred to by CAMPO as the Gorman Street extension (these two are on the plans to connect). CAMPO agreed to study the Swift Creek area excluding this route. In addition, CAMPO has started the process, which will include public hearings, to remove the route from the transportation plan.

Thursday the council held a work session to review the progress of the downtown theater. The theater is expected to be finished around August of 2013 and will hold approximately 180 people. The project will include significant work on Chatham Street to install new water lines and to create the streetscape. There will be times when Chatham Street is reduced to one lane in this area. This may pose a problem during events like Lazy Daze. All work on the streetscape is scheduled to be completed by the end of the year. As part of the streetscape the town seal located in the middle of Chatham and Academy will be removed. Instead council asked that a seal be placed in a prominent area near that intersection, hopefully in the Fidelity plaza. One note of interest presented at that intersection was that negotiations were ongoing to add another story to the Kitchen and Bath building.

In the previous days and weeks there was a lot of emphasis placed on the theater’s marquee and its lighting by the media. Specifically, the media talked about a neon sign. All that was presented in this update were three possibilities: a baseline marquee, a marquee with a vertical component, and a marquee with a vertical component that is accented by lighting. The council decided they would prefer a marquee accented by lighting. It is too early in the process to decide what type of lighting will be used. While there was some interest expressed by one council member for neon the rest of the council did not seem interested. Contrary of what was reported and implied in the local newspaper in Sunday’s article, the decision on the type of lighting will be made at our next update which is scheduled in the spring.

Saturday I, along with my wife and oldest daughter, toured the Carolina Tiger rescue outside of Pittsboro. This facility houses abused, neglected and otherwise unwanted large cats (lions, tigers, etc). The public can learn about the plight of these animals through tours and other programs. This is a “no touch” facility which means that hardly anyone ever touches these animals. That is an important rule since many of them were abused by humans throughout their lives. These animals are magnificent creatures and it was a real treat to visit them up close. If you are an animal lover this is a must see.

Sunday I attended an impressive performance of Kilbil Kalavishkar by children that are a part of The Marathi Children’s Theater group. It was a performance written, produced, and performed by children. I was joined by Mayor Holcombe, Mayor Pro-Tem Johnson, and council member Rao of Morrisville. It was a great time and we were all privileged to be present.

Emails from staff this week included a response to a citizen concerning emergency 911 coverage in areas with poor cell coverage. The following is the response:

“…I did check with our carriers locally and they do not block 911 calls even during peak periods. This would be a potentially significant liability for them and they have a lot to lose and nothing to gain by blocking 911 calls. However if a caller has made a 911 call and is connected, continues to drive and drives out of the coverage area of that tower and there is no other tower to pick up the call it will be dropped. In addition if the service area is overloaded and no circuits are available or if there is no service at all the caller will not be able to make a 911 call or any other type of call. This is also true for conventional phones. If you cannot get dial tone you can’t make a call. … “

There was also an email from staff to a citizen concerned about short timing on yellow lights and how we set the timing:

“… The yellow light times are calculated based on a nationally accepted equation that uses set parameters such as travel speed, width of the intersection, and approach grade of the road.  Yellow light times at all signalized intersections in Cary are reviewed and approved by the North Carolina Department of Transportation for correctness and consistency.  Each intersection configuration is unique, thus the parameters will be different at each intersection, making the yellow interval timing unique at each intersection.  To ensure that the timings stay correct, the Town performs inspections at every intersection four times a year.  During these inspections, staff checks the signal timing, operational equipment and vehicle detectors.  This operation ensures all traffic signals are operating as designed.  …”

In the local newspaper on Sunday this week was a story about a potential bond referendum in Cary. This story implied the bond referendum is a tax increase needed because we are not growing fast enough or at a fast rate. There were even quotes stating that there are consequences to “no growth, slow growth”. Unfortunately, I was not asked for my opinion so I will use this medium.

Whenever something is built in Cary it creates an impact on the town’s infrastructure which includes things such as roads, water, sewer, fire and police protection, etc. While Cary has developer fees to pay for some of the impact of new developments, these fees are set at a competitive rate which is about 60% of the cost of the infrastructure needed. This is an improvement of the less than 10% of the costs (in some cases) before I took office. The remaining portion of the infrastructure cost is absorbed in the tax rate.

It is important to understand that capital projects have operational costs associated with them which are not calculated in the development fee. This is also absorbed in the tax rate. In addition, operational costs have continued to increase over the years yet Cary has not increased taxes in decades. As a result there is a lot of pressure on the tax rate.

For years Cary has continued to do more with less and is one of the most efficient municipalities in the state. For example, the town operates with 8 ½ employees per thousand residents compared to an average of 11.

There are many that argue that slower growth is the reason there are money pressures, implying that a faster growth rate would create more money to pay for infrastructure. While this is partially true it is an incomplete thought. Today’s growth will create money to pay for yesterday’s infrastructure demands created by growth during that time. But today’s growth will also create infrastructure demands for the future. To put it simply, it is like using a credit card to pay off a credit card. Eventually, you will have to pay for that credit card. I believe we are at the point where we are going to have to pay for the infrastructure and associated costs created by years of growth. If not, we will see capital improvements at a much slower rate (as we have the last couple of years) and town operations adjusted to reflect the reduced revenue available. And adjusting town operations is essentially changing the level of service that we provide today. I certainly don’t want that nor do I want a tax increase. So it will be extremely important for council to decide what capital projects are needed to maintain the quality of life we have today, while at the same time create a tax rate that is as low as possible. Currently, we have the lowest tax rate in Wake County and I would like to keep it that way.

Next week will be busy for me. It will include giving the State of the Town live at a Chamber Breakfast, speaking with other mayors at a panel of realtors, a council meeting, and a policy advisory committee meeting of the Western Wake Partners.

Well that is all for this week. My next post will be on Sunday, January 29th. Please feel free to email me with a comment. Email all Town of Cary questions or comments to Harold.Weinbrecht@townofcary.org. Email personal comments to augustanat@mindspring.com.