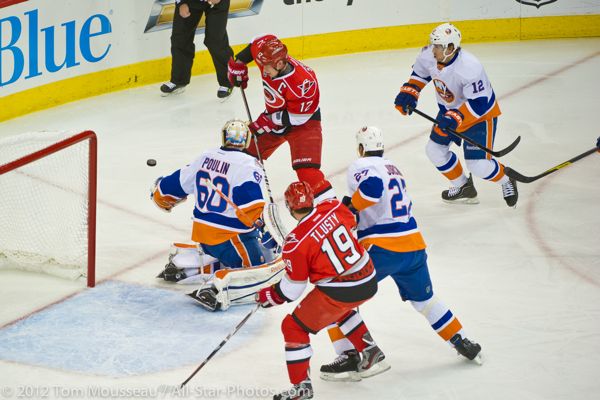 Both teams came into the game with 45 points with the Islanders having 2 games at hand.  This was the first game for both teams coming off the All Star break and early on it looked like a preseason game with sloppy passing and lethargic play by both teams.

The Islanders were controlling the puck from the opening faceoff but it appeared more because the Canes just weren’t aggressive enough on the puck or on the man.  After the Isles came into the Canes zone on the right wing, Jay Harrison took on two Islanders and pulled out a 9-iron rather than a 2-iron and chipped one over the glass for a 2 minute delay of game minor.  The Islanders have one very strong line and had them out for the power play.  All Star John Tavares came down the left wing with speed, went around  Brandon Sutter into the corner and found PA Parenteau  all alone in the sweet spot of the slot, shooting high glove side for the power play goal.   Late in the first,  Pat Dwyer was along the boards in front of the Canes bench, made a nice pass to Sutter who split the defense and made a bee line to the goal.  The puck was bouncing just a bit and Sutter wasn’t able to get it under control as Islander goalie Kevin Poulin made a nice save.  If that went in, I really believe the outcome of the game would have been different.  The line of Jeff Skinner, Jussi Jokinen and Riley Nash, called up from the Charlotte Checkers, was getting slashed, hooked and tripped on every shift.  Somehow, someone has to step up and maybe not so politely inform opposing players what they shouldn’t be doing if the refs won’t.   Shots after 1:  Canes 8, Islanders 8

Canes Need to Step Up

Admittedly I’m an Eric Staal fan, but more so since covering the team for CaryCitizen.

One benefit of press row is being up high to have the ability to watch plays form while concentrating on one player at the same time. What Staal does off the puck is very impressive.  He must have had 3 or 4 feeds into the slot that were unbelievable but nobody was home.  Coach Kirk Muller’s coined phrase is “no passengers”. 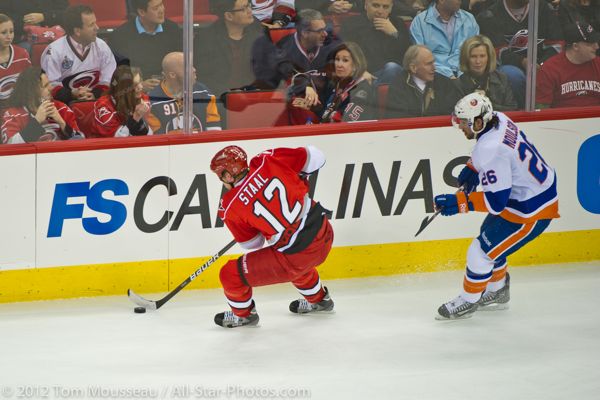 My take on that is he wants players to give it their all on every shift, on and off the puck.  Staal is not a passenger.  He’s big, strong, has a shooter’s mind and a sense for where players are on the ice. His reach and strength led to a semi breakaway on a man down situation.  His stick handling is probably the weakest part of his game but almost pulled off what would have been the Canes ninth shorthanded goal, and maybe the prettiest, if he connected.  The Canes were down because of a retaliation slash by a really frustrated Jeff Skinner. As almost always, it was the retaliating infraction that got called.  Skinner is in a talent pool above most players.  Tonight it seemed every Islander had to have their ticket punched after they gave Skinner a slash, a stick between the legs, a crack on the ankles, a grab of his sweater, a push in the back, anything to frustrate the heck out of him.  After one slash too many, he let his frustration out with a love tap in return.

Hardly worth 2 minutes – so my advice would be to score or give it a Tim Gleason or Bryan Allen style love tap.  With Riley Nash off for a very controversial hooking penalty, the Islanders scored on another power play.  Mark Streit had the puck on the left point and sent a shot into traffic.  Staal had his stick in perfect position with the shot hitting Staal’s stick.  The puck trickled into the middle of the slot with Matt Moulson picking up the puck, turning around, wristing a shot that was a back breaker.  Shots after 2: Canes 13, Islanders 18 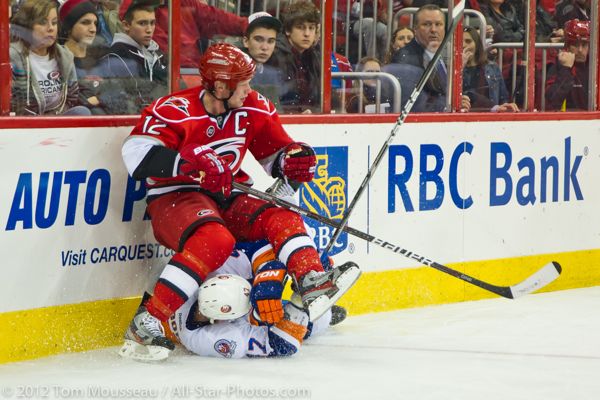 The Canes came out in the third a completely different team.  Makes you wonder what words of wisdom were said in the locker room.  They were first on the puck in both ends and, for the most part, controlled the neutral zone.   With the Canes showing some grit, Gleason took a shot from the right point.  Sutter picked up the shot that was blocked by Tavares, skated to his left then sent a back hander off the crossbar into the net for a pretty goal.  Sutter is another player to watch off the puck.

He’s very young, 23 in 2 weeks (ladies: his birthday is Valentine’s Day) but plays like he has 10 years in the NHL.  A very smart, and obviously, a well-coached player.  Parenteau was off for slashing giving the Canes their first power play.  The crowd was getting into the game after Sutter’s goal and was wanting more.  The Canes first power play unit was very aggressive and all over the puck.  After a save by Poulin, the puck was being hacked and whacked by both Staal and Skinner. Tim Brent picked up the loose change behind the net and dished it out for what was meant to be a feed but found the skate of an Islander defender and went into the net to the delight of the college night crowd. 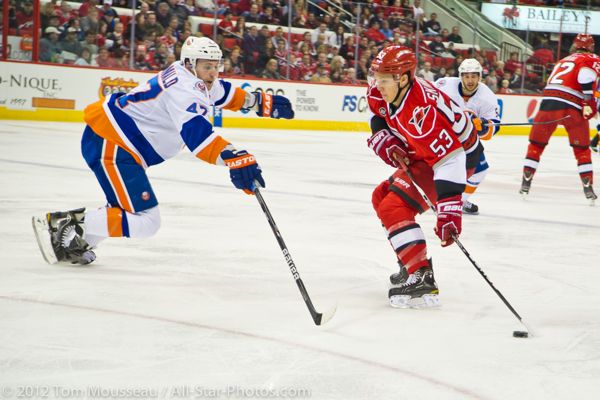 After a dump in by the Islanders, Cam Ward mishandled the puck off the boards.  Matt Moulson raced to the puck then found Tavares all alone off the left circle and the sharpshooter doesn’t miss from that range.   Needless to say, Ward showed his frustration by nearly breaking his stick across the goal post.   Late in the game with Ward pulled, the Islanders scored 2 empty-netters.  The stats will show several top Canes with minus figures on the +/- column but those came when the net was empty.  One other reason why that statistic is a guide at best.

There were no Canes as passengers in the third, problem is there were some in the first 40 minutes.  Shot totals: Canes 23, Islanders 26