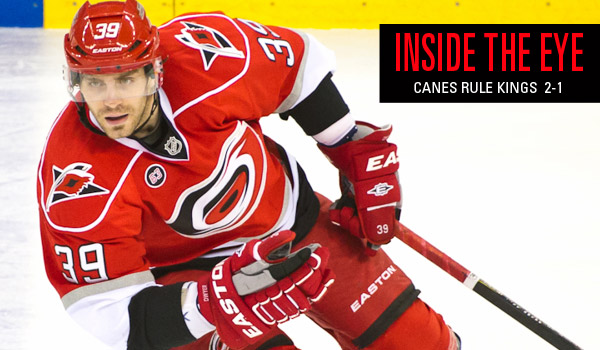 Cary-lina, NC – A royal win for the Canes over the Kings, 2-1 on Saturday night.

The Carolina Hurricanes had a slow start in the first period but came back with good effort in the second and third for a 2-1 victory over the L. A. Kings.

The Kings have ex-Canes fan favorite Justin Williams, who scored the game sealing goal in the Stanley Cup final back in 2006.  They also have Jack Johnson who was the Canes first round draft pick that between him and his father, made it known he never wanted to play in Carolina.  Jim Rutherford traded Johnson for Tim Gleason.  Enough said!

Kings Pour It On, Ward Sharp

Cam Ward had to be sharp early as the Kings were making up for a bad loss in St. Louis the night before.

On a centering pass from the corner deep in the Canes end, the puck had a hard bounce off Jamie McBain’s skate headed right for the corner of the net but Ward made a reflex stop.

The Canes had 3 power plays on the night but had a new look on the first two with 4 forwards: Eric Staal, Jeff Skinner, Tim Brent, Riley Nash and Justin Faulk as the lone defenseman.

To me it looked like this was an attempt to have the power play unit jump start the offense and also to continue the success they’ve had with the man advantage since the end of December. Unfortunately the Canes didn’t seem to get set up at all on this attempt.

Just as the power play ended, Anthony Stewart got called for crosschecking when he made an overly aggressive play to muscle a player off the puck in front of the Kings’ bench.  The Kings wasted no time on their power play when Johnson passed the puck over to Williams.  Williams made a nice centering pass to Anze Kopitar uncovered in the slot, scoring from about 30’ out on a hard one time about 3” off the ice.

Later in the period, Gleason was hooked deep in the Kings zone, sending him sliding feet first into the ref looking like he could have won a human bowling contest in between periods.  The Canes used the same 4 forward power play unit but struggled again with just one shot on goal.  In the first period, the Kings had the extra step and quicker sticks.

Very late in the period, Gleason paired off with Kyle Clifford with Gleason getting in a few shots before wrestling Clifford to the ice.  Gleason could have been thinking the Canes needed an awakening, could have been a carry over from the ‘in your face’ meeting the two had in the corner or could have been a thank you to the fans for his new $16 million, 4 year contract.  Doubtful on that last thought.  Wouldn’t it have been interesting if it was Johnson but both are on the USA team.

Jay Harrison pinched deep in the slot, used his size and strength digging for the puck and a poor little King fell to the ice. There’s nothing in the rule book for being a weak skater so the refs had to pick on the other player involved and called Harrison for tripping.  The penalty kill team was very effective with both Pat Dwyer and Brandon Sutter all over the ice with aggressive skating and perfect stick positioning.

Sutter and Staal both have long reaches that are invaluable on a penalty kill.  Staal used his reach to poke check the puck away at center ice along the boards and killed time  skating into the Kings end. On the same power play, Ward had to make another key save on a shot from the right point into traffic.  Ward was totally screened but managed a great, almost instinctive, pad save.

With power play over and the Canes in the Kings zone, Staal started to show his frustration when the puck jumped over his stick then connected on a golf shot as if he was challenging John Daly to a longest drive challenge.  At this point in the game, Staal did not have a shot on goal whereas his linemate, Tuomo Ruutu had 6.  Any player would be fine with that as I’m sure Staal was, but he certainly wants shots on net and to score.

Jussi Jokinen drew a holding call when he was in better position on Brad Richardson during a clear by the Kings.  While the power play unit was the traditional 3 forwards, 2 defensemen, the result was the same, no goal, but there were 3 shots on goal.

Jiri Tlusti got the crowd back in the game when he blocked a shot by Alec Martinez at his blue line, turned on his jets to get the puck just inside the Kings blue line then sent a laser into the long side of Kings‘ goalie Jonathan Brenier with 4:20 left in the second.

Early in the third, much of the play was between the center zone to just inside the blue lines of each end.  Both teams were playing very cautiously, not wanting to make a mistake costing the game.

On the third shift of the period for the Skinner line, all three forward were doing a great job forechecking. Skinner forechecked the puck away from players 3 times to keep the puck deep in the Kings end.  After gaining possession, Skinner passed to Andreas Nodl along the back boards.  Nodl found Jokinen on the side of the faceoff circle who to a quick shot on goal.  After Skinner’s initial pass he did what all scorers do and went to the net, knowing Jussi what going to shoot.

As Brenier made the initial save, Skins sent home the rebound for his 15th goal of the season and eventual game winner.

Staal got his first shot on goal with 9:23 left in the game.  He collected the puck at the right faceoff circle  and waited patiently for a shot that was destined for the upper left corner but Brenier made a stop with his shoulder.  Bryan Allen made a very nice defensive play by handling the puck behind Ward then took one for the team as Mike Richards gave a hard body check just as Allen got off a good pass to Drayson Bowman who easily carried the puck up ice.  Allen was more than willing to share the love when he, legally, clocked Dustin Brown at the blue line.

After the slow start in the first, the Canes played solid defense and smart hockey the final two periods to seal the win and take the Canes out of the Eastern Conference cellar.