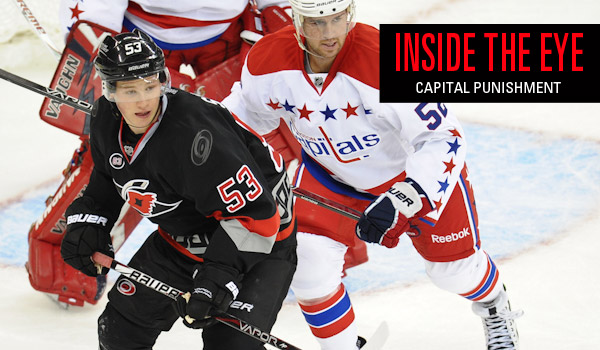 Story by Bob Fennel. Photos for CaryCitizen by Suzie Wolf.

Cary-lina, NC – The Carolina Hurricanes played an outstanding game in every aspect blanking the Washington Capitals 5-0 behind Justin Peter’s first NHL shutout.   Eric Staal led the offense with 2 goals and an assist while the entire team, and fans, were energized from the opening drop of the puck to the final horn.

Faulk for Rookie of the Year?

With the game on national TV, the Canes came out with the better overall play early on.

The Caps have more on the line: if they won, they would leap frog 2 teams into a playoff spot.  But it was all Canes early on – and all night. The Canes power play has been very good since the end of December even though their overall numbers rank near the NHL bottom. With Roman Hamrlik off for elbowing, the Canes went on the power play early in the game and added to their 2012 numbers .

Staal won the face off with Jiri Tlusty taking the puck down low then passing up to Tim Brent on the right point.  Brent carried the puck to the center just inside the blue line then let go a slap shot. Tomas Vokoun made the initial pad save but Justin Faulk came charging in, sending the rebound in for the early 1-0 lead.

Faulk leads all rookies with ice time and his play is starting to get some attention for the Rookie Of The Year.  While he has gotten better as the year progressed, he is an impressive player that skates very well and knows how to use leverage on the boards. 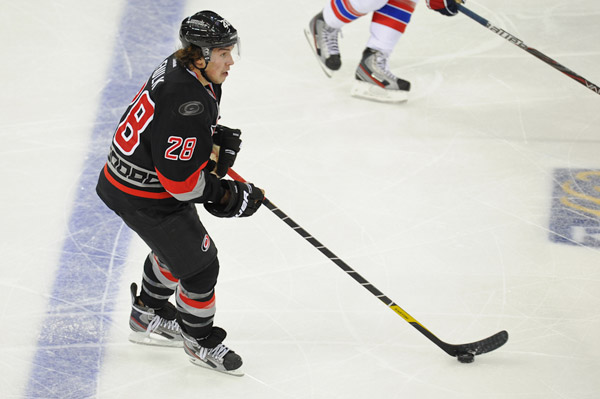 Just over a minute later on outstanding forechecking by Tlusty forced a turnover just inside the Caps’ blue line.  Tlusty passed to Staal who made a nifty pass to Anthony Stewart skating through the slot for a quick 2-0 Canes and chasing Vokoun after only 5:09 gone in the game. Brooks Laitch outskated Tim Gleason to the puck to avoid an icing with the ensuing play resulting in a potential wrap around.  Peters was quick to cover the corner, made the save that allowed Jeff Skinner to start a rush up ice that didn’t result in a goal but was a great effort with Jussi Jokinen taking a solid shot on goal.

With 3:18 left, Marcus Johansson took a shot that Peters blocked.  The puck trickled on the goal line to the side of the net with Jason Chimera attempting to pull the puck back but Peters sprawled across the entire crease to freeze the puck with Bryan Allen ensuring  more than the puck was frozen to the ice.  With 55 seconds left, after a strong play in the defensive end by Allen, Brandon Sutter picked up the puck, went the entire ice on the left wing, had Pat Dwyer in center, made a sweet pass to Andreas Nodl on the right wing whose one timer gave the Canes the 3-0 lead. 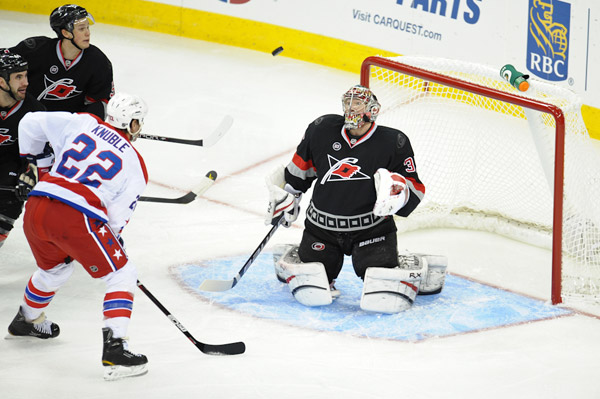 With Derek Joslin off  for elbowing, the Caps had their first power play of the night.

A pass back to the point went wide so Staal took off for the races.  He turned on his jets, won the puck skated straight to the goal and scored a beauty back hander just as his skates were pulled out from under him.  It was the team’s 10th shortie and the franchise leading 12th of his career.   With the Canes dominating the game it was no surprise with all the Caps have on the line and on national TV, that something had to erupt so Matt Hendricks and Derek Joslin were sent off for roughing after a wrestling match.  Feeling short-changed, as soon as they returned to the ice they squared off and earned 5 minute majors.

When Joslin saw himself on CanesVision, I will admit it’s the first time I’ve seen a player smile acknowledging the crowd about his reason for being in the box.   With just over 3 minutes to go, and thanks to spotter Jim Kelly in section 125, Troy Brouwer high-sticked Faulk in the face with the puck well out of their area.  Faulk gives up several inches to Brouwer but got in solid shots much to the appreciation of the highly partisan crowd. 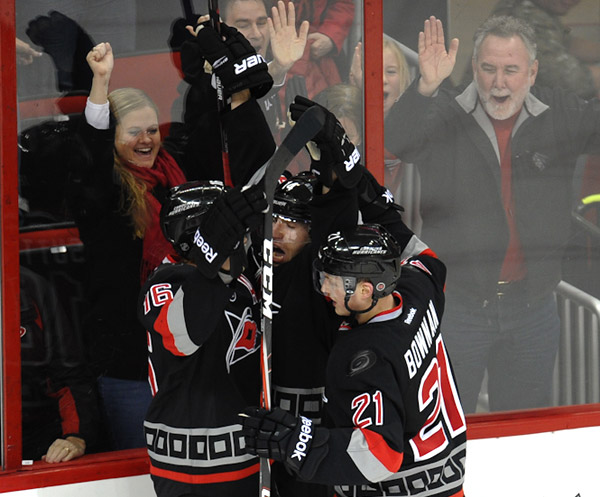 The third period was just like the first 2 for the Canes with aggressive play at both ends of the ice.

The Canes did an excellent job keeping the puck in the Caps zone with someone stopping the puck at the blue line on every Cap attempt for a clear.  On the last attempt, after a gutsy pinch by Jamie McBain, that kept the puck in the Caps end, the Caps tried to send the puck over the blue line.  Jaroslav Spacek charged the blue line from center ice and rather than hit a long slap shot saw Staal camped out on ‘Staal’s corner’ and sent a one time wrister home for a commanding and well deserved 5-0 lead.   Alex Ovechkin is one of the best players  and one of the hardest hitters in the NHL.  Skinner picked up the puck in center ice, went down the right wing with Ovie in pursuit .  Skinner made a strong move to the net and just as he got off the shot Ovie tried to knock him off his skates but it was Ovie who almost went down.  Not saying Skinner will ever out-hit Ovie, just he’s extremely strong on his skates.

No team wants to be shut out.  The Caps were just out-manned, and out-played in every category.  The entire Canes team responded with their second consecutive shutout against the Caps at the RBC center.

Jay Harrison made sure he recovered the game puck for Peters’ first NHL shutout. 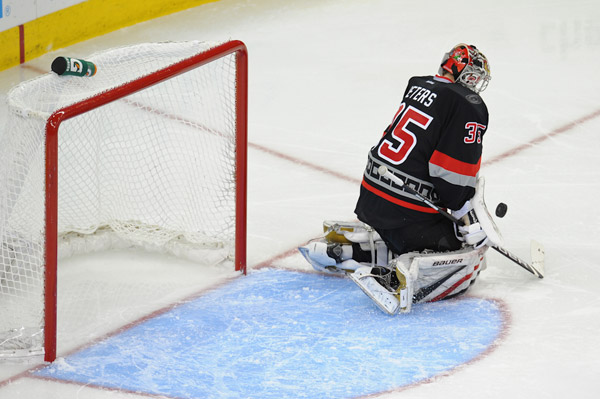