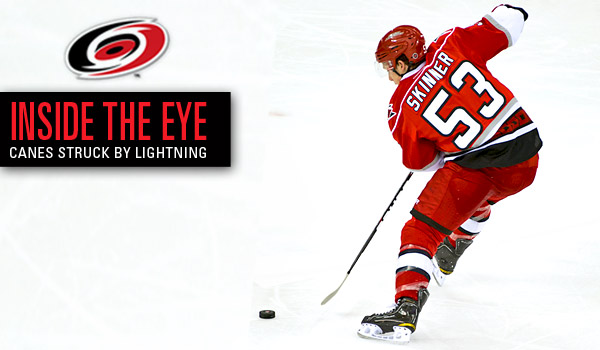 Cary-lina, NC – The Carolina Hurricanes lost the 100th meeting with the Tampa Bay Lightning, 4-3, in overtime, bringing the overall match-up record to 47-37-15-1.

Steve Stamkos scored a power play goal, 2:41 in OT after a highly controversial call that gave the Bolts a power play.   Most games with Tampa Bay are loaded with goals.  They lead the Southeast Division with 184 goals for but also lead the NHL with 219 against.  Stamkos now has a league leading 48, linemates Teddy Purcell, 19, and perennial Cane killer, Martin St. Louis, has 22.  That’s nearly half of their entire team’s goals.

Jaroslav Spacek was making a pass just over the blue line when Pat Wallace came racing in, picked up the puck, went in alone and sent a snap wrister from 30’ out for his first NHL goal.

Justin Faulk made an excellent play lifting the stick of St. Louis just as he was about to shoot from point blank range.  It’s non-scoresheet play like that, in addition to his ice time and scoring stats, that are elevating his chances for the Calder Memorial Trophy as Rookie of the Year.

The Canes got the first power play of the game when Jeff Skinner kept his legs moving while he was being hooked by Ryan Malone.  For good reason, the NHL does not keep track of how many penalties a player draws, but Skinner has to be near the top if they did.

One reason is the poor man gets beat like eggs for a Sunday omelet, on and off the puck.  He needs a linemate that has skill, size, speed and can be a little intimidating.

The Canes power play didn’t have any solid chances as the Bolts forwards did a credible job sending the puck down ice several times.

The Canes started the second on the tail end of the power play from the first period. Seconds before the man advantage ended, former Hurricane Mike Commodore got his stick between the legs of Justin Faulk for another penalty.  The Canes looked a little better on the power play as they got off 2 decent shots.

After the penalties ended, Eric Staal made a 50’ pass to Anthony Stewart on the right wing, hitting him in stride.  Stewart, who has size and speed, turned on his jets, went straight to the goal, faked a forehand shot then sent a backhanders five-hole to tie the game at 1-1.  The assist by Staal continued his streaks of 10 straight games with an assist and 11 games with a point.

Cam Ward made a great save high glove side off Stamkos after a bad turnover deep in the Canes end.   The Canes could have been credited with a shorthanded goal as both Jussi Jokinen and Chad LaRose, along with Brett Connolly and NateThompson for about a minute. LaRose was getting beat like a rag doll and was headed to the bench, when Thompson went to the corner, tried to pass around Skinner but hit the side if his goal.  The puck bounced in front of the goal where Jokinen raced to get the puck and sent a one timer into the upper right for the Canes first lead, 2-1.

A minute and a half later, on a muscle play by Staal over St. Louis, yes size does matter, Staal sent the puck to the boards behind the goal.  Stewart beat his man to the puck and sent a backwards pass between his legs to Jiri Tlusty who appeared to make a lightning quick release but the official scorer said the puck bounced off Lightning Brian Lee giving the goal to Stewart.

Stamkos couldn’t be kept off the scoresheet for long.  He picked up the puck inside his blue line, zigged and zagged his way into the Canes zone then used Bryan Allen as a screen sending a perfect wrist shot off the post on the far side of Ward then into the goal.

Stay Out of the Box

The Canes waited until the third period for penalties then dug themselves in a hole. First, Tlusty got called for tripping. Then, just before that ended, Staal got called for a weak slash.

Before the whistle stopped play on the pending Staal penalty, Tampa Bay held on to the puck long enough for Tlusty’s penalty to end. Tlusty came on then La Rose got called for a hook giving the Bolts a full 2 minutes of a 5 on 3.

The Canes did a great job killing the penalty but with just 5 seconds left, Purcell put one in from the high slot. The Bolts were apparently settling for a tie in regulation which means they’re playing for the one sure point.  They have a good chance to make the playoffs so every point counts.

On Overtime, the Staal and Tlusty had a couple of good scoring chances then out comes Sutter’s line.  A Bolt defenseman broke his stick, and Sutter made a dash to the net. Mathieu Garon was far out of the crease, Stamkos pushed Sutter, with Sutter making an unbelievable leap and flip head over heels over Garon, making contact on his take off.

On an absolutely horrible, game deciding call, Sutter was called for roughing.  That call has to be reviewed by the NHL as it couldn’t possibly be roughing, couldn’t be goalie interference and the fact it was in OT with the game riding on that call.  On the 4 on 3 power play, Stamkos scored the game winner meaning the Canes lost another game influenced by officiating controversy.