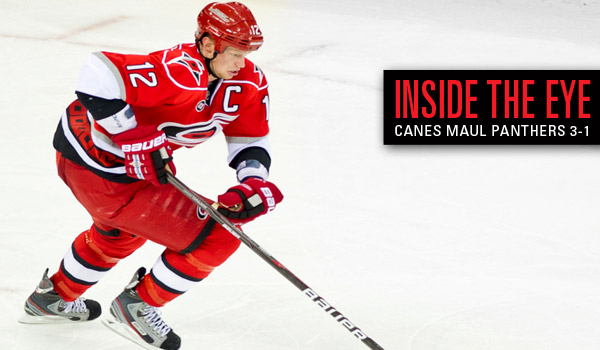 Cary-lina, NC – Don’t look now but when the Carolina Hurricanes beat the Florida Panthers Wednesday (score 3-1 March 21 at the PNC Arena), they snuck up on the playoff race and  are now only 5 points out of the 8th playoff spot.

It was another sold out crowd on a night honoring Public Safety with the home team finally getting the better of the Panthers after losing the first 4 meetings this season.  Jeff Skinner was also back in the line up after serving a 2 game suspension for kicking a player with the blade of his skate.  It may have looked like retaliation and being frustrated for being a slashing/boarding/roughing/cross-checking target by every opposing team.  No question he was guilty, but someone needs to step up.  This is a team sport.

The first time the Canes had the puck in the Panthers’ end, Eric Staal, stopped a clear right at the blue line, carried the puck through the left face off circle, around the goal, went wide sending a hard centering pass to the crease. The puck pin balled off a Panther’s defenseman’s skate into the goal for an early 1-0 Cane lead.  A few minutes later, Cam Ward stopped an identical wrap-around shot on a nice pad save with Tim Gleason clearing the puck and two bodies from the crease.   Skinner had an errant high sticking penalty then exchanged slashes with Mikael Samuelsson after a simple glove save by Jose Theodore. Thirty seconds later Dmitry Kulikov was called for high sticking Jamie McBain giving the Canes a 4 on 3.  It appeared that Muller had players who earned power play time on the ice rather than the usual lines. It’s nice to see a reward system but even nicer to see goals.  A big body needs to be in the dirty area of the crease who is hard to move.  Shots after 1: Canes 14  Panthers 8

The Canes fourth line was up against the Panther’s first line and was in need of a stoppage in play.  Tim Gleason, being the team player he is, took a hooking penalty putting the Canes a man down.  The Canes are second in the NHL with 11 short-handed goals and twice nearly earned number twelve.  Brandon Sutter and Pat Dwyer looked great together on the penalty kill.  Dwyer was on the side boards just above the goal line in the corner and threaded a pass to Sutter cutting in front of the net.   Sutter circled the net for a wrap-around that certainly looked like it was in but the video judge over-ruled me.

Seconds after Gleason’s penalty was over, after a touch pass by Skinner, Tuomo Ruutu carried the puck up the left wing and dropped a beautiful pass to Pitkanen who slapped one home from about 35’ out.  That goal actually brought a smile to Joni as I’m sure there was some words on the bench leading to the smile.  A minute and a half later, Ward made a good pad save off Ed Jovanovski but the rebound bounced out too far. Tomas  Fleischmann slapped at the puck which would have gone wide but hit Pitkanen’s skate into the goal to cut the lead 2-1.  Shots after 2: Canes 28 Panthers 25

Early in the third, Mike Weaver was called for delay of game after clearing the puck into section 122.  The power play was 6 seconds old when Jiri Tlusty was called for hooking behind the net.  Brian Allen’s play on the 4 on 4 was outstanding. Either by force or intimidation, he had the Panther’s giving up on the puck.

Jeff Skinner has to lead the league in drawing penalties and added to that total when he was tripped along the boards.  On the power play, after shots by Pitkanen, Staal and Tlusty, the puck came back to Joni at the mid area of the blue line.  Joni passed to Staal inside the left faceoff circle and threaded a wrist shot in the upper corner for a commanding 3-1 lead.   Late in the period Skinner again exchanged slashes, this time with Scott Upshall. After they came out of the box, the Panthers pulled Theodore.  Jussi Jokinen threw a puck at the goal that bounced off the post and Staal did put one in a second after the final buzzer.

I don’t know whether it was the Staal non-goal or just bad blood during the game but both teams lined up at center ice waiting for someone to make the first move.  Looked like West Side Story  between the Jets and the Sharks but the officials made their best officiating moves of the night getting everyone off before real trouble started.

Get Rid of Old Pills and Medications This Saturday