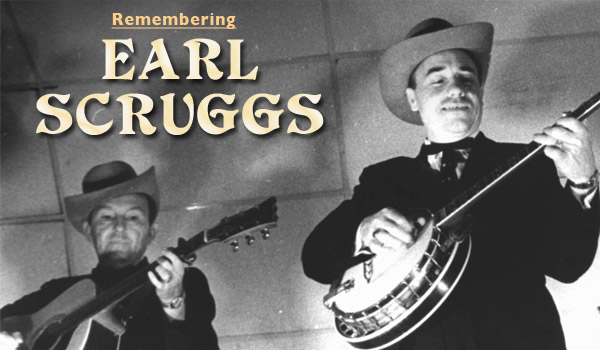 Cary, NC – Banjo-picking legend Earl Scruggs died yesterday at the age of 88. He was a favorite son of North Carolina and forever changed the music we call bluegrass.

Earl Scruggs was born in Shelby, North Carolina. He rose to prominence as part of Bill Monroe’s Blue Grass Boys after 1945.

In 1948, Scruggs left the band to start his own outfit with guitarist Lester Flatt. First called the Foggy Mountain Boys, it later  came to be called Flatt & Scruggs.

Scruggs pioneered a three-finger style of banjo picking, now known as Scruggs style, that is a foundation sound of bluegrass.

Perhaps Scruggs best known performance was for television, not radio or records. In 1962, along with Lester Flatt and Jerry Scoggins, Scruggs recorded the theme song for the TV series Beverly Hillbillies. It became an instant hit on the country charts and an instant classic across the world.

In this video, Flatt & Scruggs perform Foggy Mountain Breakdown from 1965 at the Ryman Auditorium in Nashville, TN.

You can also see this video on YouTube. With thanks to the Grand Ole Opry.

History of the Carolinas: Women Pirates