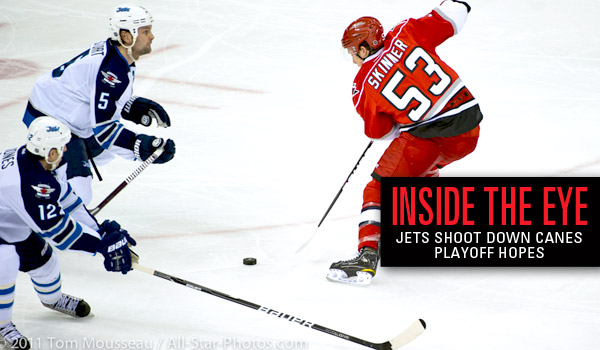 Cary-lina, NC – On Friday March 30, the Carolina Hurricanes lost to the Winnipeg Jets 4-3 in overtime and also lost their slim chance of making the NHL playoffs.

There are several subplots playing against the Jets: former Cane and very good friend of Eric Staal and Cam Ward – Andrew Ladd –  is captain. Anthony Stewart played for the then Atlanta Thrashers last year.  Zach Bogosian had the hard hit on Andreas Nodl in their last meeting and Nodl hasn’t played since.

Winnipeg got on the scored board first when Nick Antropov was left uncovered on a defensive lapse and allowed to take his time on a wrist shot from 20’ out beating Cam Ward high on the short side.  Coach Kirk Muller had an expected reaction on the bench and the team responded.

Anthony Stewart stepped up and challenged Bogosian but it was more of a strength takedown move sending both off for 5 minutes.

The Canes scored just seconds after the penalty started with Jeff Skinner handling the puck behind the net, faking left, then right, then made a perfect behind the back pass to Derek Joslin left all alone in front of the crease for a one timer over Chris Mason’s right shoulder.

Here’s an interesting fact: all professional teams have to provide a starting lineup before the game.  In hockey, if there’s a substitution before the drop of the first puck, it’s a penalty.  The Jets had Ondrej Pavelec as the starting goalie but not surprising, a penalty was not called.

Tim Gleason was showing his grit as on one shift he started to pair off with Nik Antropov but the linesman stopped everything.  On Gleason’s next shift, he dropped the gloves, didn’t get a dance partner then appears to have said a few choice words giving him a double minor for unsportsman like conduct.

On the man down situation, Staal used his strength to knock the puck away from Blake Wheeler, then raced down the ice with Tim Stapleton all over him.  Just as they got to the net, Staal did a 360 then sent a hard shot along the ice for the Canes 12th shortie of the season.

Early in the second, Tim Brent made a nice dump pass to himself to get behind the Jets’ defense along the back boards. While he was tied up, Drayson Bowman made a nice move to grab the puck and tried a wrap around but the defense and Mason were quick to block his attempt.

Bodies were filling the crease but the puck was still loose and Brandon Sutter was Johnny-on-the-Spot to lift the puck into the net for a 3-1 Cane lead.

Skinner drew another penalty by the Jets giving the Canes their first power play.  While the Canes did not score, the passing was excellent and they kept the puck in the Jets zone the entire 2 minutes.

Coaches preach to get the puck on net or in the slot area as good things happen, and they did.  On a weak 2 on 1, Spenser Machacek was going down the right wing with just Jay Harrison back. Just as Machacek went through the face off circle, he sent the puck to the slot and while the goal was given to Jim Slater, it appeared to bounce off Harrison’s skate.

That goal seemed to spark the Jets as up to that point, the Canes were clearly dominating the game. Tuomo Ruutu was slashed putting the Canes in the man advantage again.  This time the Jets were very effective on the penalty kill.

One highlight during the power play was a behind the back pass from Staal along the side boards right to the tape of Chad LaRose’s stick in front of the crease but was quickly man handled.

The Jets came out more aggressive in the third.  The Canes were up to the task as they played excellent defense by clearing bodies from the crease and sending loose pucks to the side boards.

Jiri Tlusty got tangled with Evander Kane in the Canes’ corner with Kane going down from an inadvertent high stick.

The Jets got off a few close shots all stopped by Ward but Kyle Wellwood was camped out on the right post for an easy open netter on the front end of the 4 minute double minor.  Staal again made a nice play clearing the puck but was hauled down.  Skinner picked up the loose puck, raced to the Jets goal and was also hauled down from behind. For an obvious second penalty on the same play.  Problem was these were the same refs that didn’t call the penalty on the pregame substitution and only the penalty on Staal was called much to the disappointment of the third sellout crowd in a row.

In overtime, Bogosian had the puck on the left point and sent a shot at Ward.  Justin Faulk was covering Ladd but lost an edge giving Ladd an extra step to get the rebound and put one past Ward after just 16 seconds, killing the playoff dreams of the Carolina Hurricanes.

In the pregame stretch, Ward and Ladd had met at center ice for a few minutes.  Wonder if there was any friendly wager placed on the outcome?