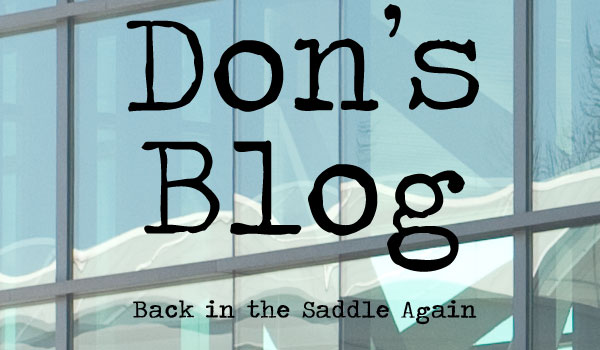 From the blog of Don Frantz, Cary Town Council member representing District B. Photo of Town Hall by Hal Goodtree.

Cary, NC – The last month been rough. I woke up one morning with excruciating pain in my neck. I couldn’t move, well I could, but that made the pain even worse. I went to the doctor to find out what was going on. He sent me for X-Rays – nothing. He then scheduled an MRI. Soon after that, I’m meeting with a neurosurgeon who’s asking me how soon he can get me on the operating table.

It turns out I had two herniated discs in my neck – one was completely disintegrated and the “debris” was wreaking havoc on a nerve that was causing shooting pain and weakness in my right arm and shoulder. I couldn’t even pick my arm up over my head. No amount of physical therapy was going to help the doc said.

I had surgery the following Monday to remove the debris, and fuse 3 vertebrae together. The few days following surgery things were going pretty well – the pain was much less than before and I was able to sleep through most of the night.

Two days of uncontrollable vomiting with a bum neck – Nice.

Things seem to be going pretty well now. Some days are better than others but all in all I can’t complain. It beats the heck out of where I was a few weeks ago.

Everyone keeps asking me, “how did this happen?” I have no idea. I can’t think of any single one thing I did lately where I may have caused this. I was involved in a motorcycle accident 10 years ago that put me in the hospital for a few days with a busted shoulder, collapsed lung and broken ribs, but I never had any neck injuries. Lucky me I guess.

Thanks so much to the surgical team and doctors at Rex for fixing me up, and especially my wife Lisa “Florence Nightingale” for taking great care of me. I am so blessed.

Back in the Saddle Again

Until this past week I was unable to attend a number of town events and meetings. But I’m back in the saddle again!

The council held a work session this past week to discuss a number of topics.

Council heard from staff and consultants on a number of items pertaining to the town’s Public Art Master Plan. Key discussion points centered around funding in regards to both public and private development. Staff was recommending a percent for art program. This would require a percentage of the cost of the project be dedicated to public art. For example, if a private developer or the town were to build a $10 million project, $100,000 would have to be spent on public art.

The council did not support a percent for art program, and instead directed staff to look into ways we can incent the private sector to incorporate art into their projects, and for the town to consider, but not require public art with public projects on a case by case basis.

We received an update from Downtown Development Manager, Ed Gawf regarding a number of initiatives, but the main focus of this session was the proposed downtown park – or “opportunity site” as Ed likes to call it. (this is the property across from the Cary Arts Center bordered by Park, Academy, Walker and Walnut Streets). I requested this session as there seemed to be some confusion regarding the town’s intent. For years we have been telling folks this property would become Cary’s Downtown Park. However, we are also considering locating the new downtown library and associated parking deck on this property, and there is also interest in some amount of retail and restaurant space. The last time the council discussed this site was at our 2010 council retreat.

Ed proposed giving him 6 months to work with other professionals land planners to develop a number of options to present to council. I struggled with this request for 2 reasons. 1) I kinda liked the plan we agreed upon in 2010, and 2) one of the reasons I ran for council was that I was sick of planning. We had planned, planned, and planned some more downtown, but weren’t actually doing anything. Obviously that has changed in the last few years. However, given that we have not acquired all of the property on this site as of yet, there is still time to revisit. Ed said 6 months. He has until October. ;-)

Council agreed to create a BID downtown to facilitate the mitigation of impact fees. The town cannot legally waive fees in one area of town while requiring them in another. The BID would enable the town to pay the fees. Yes, we are paying ourselves – sounds dumb, I know, but the law is the law. There is NOT an associated tax increase with the creation of the BID.

Council briefly discussed the timeline and process for filling departing Councilmember Julie Robison’s seat. If any of you are interested in serving out the remainder of her term, start getting that resume ready! Just be careful what you wish for. ;-)

There were three notable items on our council meeting agenda this past Thursday.

St. Michaels submitted plans to construct a new gymnasium, and were requesting a waiver of associated road improvements to include the widening of High House Road along their frontage, prohibit left hand turns out of their eastern most driveway, dedicate the required right-of-way and the installation of a traffic signal.

The council agreed to waive the all the improvements except for the dedication of right-of-way given that this project would not add additional students or vehicle trips. In fact, traffic may be less as students would no longer have to travel to other locations for practices and meets. This location also does not meet warrants for a traffic signal, and NCDOT would most likely deny the signal installation. St. Michaels will however be expected to make traffic improvements should they ever add classroom space or other development that increases vehicle trips.

Chickens: The issue that just won’t go away ;-) Heck, what am I saying, this time it’s my fault. The council agreed on the following:

We have discussed this issue ad nauseam so I will keep my comments brief. I was pleased with council’s decisions except for the number of chickens allowed and the fee. I had pushed for 8 chickens and a $10.00 fee to be more in line with what we charge for dogs and cats. I lost those votes. I also asked staff to make sure the recommended setbacks wouldn’t prohibit folks who live on odd shaped lots the opportunity to keep chickens. This issue now comes back to us for public hearing in May and then to our Planning and Zoning Board before final council decision June 28th. Yes, government moves slow – most of the time that’s a good thing.

Last but not least was council consideration of a request from Councilmember Lori Bush to direct town staff to investigate creating a “technology task force” to better communicate with citizens, improve our service delivery and increase citizen involvement. I was the co-sponsor. The council granted unanimous approval.

Afterwards we held a closed session to discuss some ongoing legal issues.

That’s all for now. As always, thanks for reading!