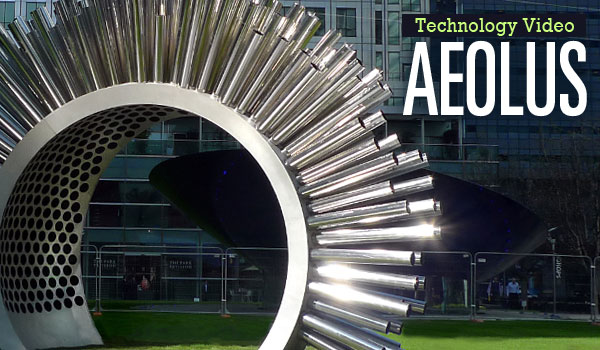 Cary, NC – Here’s a fascinating video about a mashup of science, music, technology and art. It’s called Aeolus, and it’s a giant harp that plays the wind and captures the sky.

British artist Luke Jerram plies the terrain between art, science and imagination. He is known for large scale public art projects like Sky Orchestra, a collection of colorful hot air balloons that float over cities and towns and project music down at the people on the ground.

Aeolus, which Jerram calls “an acoustic wind pavilion,” looks like a big sculpture of shiny pipies arranged in an arch. Some of the pipes are attached to long strings that are pulled tight and attached to towers.

The strings and the pipes vibrate with slight changes in the wind, “playing” the sculpture. The sound is best described by an observer who said that “it sounds like the wind’s got a secret.”

From Aeolus: “The sculpture a giant aeolian harp, designed to resonate and sing with the wind without any electrical power or amplification. Vibrations in strings attached to some of the tubes are transferred through skins covering the tops, and projected down through the tubes towards the viewer standing beneath the arch.”

The tubes, polished on the inside, reflect the changing sky like a steel prism.

From Aeolus: “The artwork was commissioned to inspire the public and engage them in the subjects of engineering, acoustics and aerodynamics. Aeolus sculpture and associated science public engagement is the result of a collaboration between Luke Jerram and Institute of Sound and Vibration Research at the University of Southampton and The Acoustics Research Centre at the University of Salford.”

Aeolus is named for the Greek god of the four winds. It has toured across the U.K. but has never been to the U.S.

You can also watch the video Aeolus at Eden on YouTube.

Lori Bush: What Is Public Art?