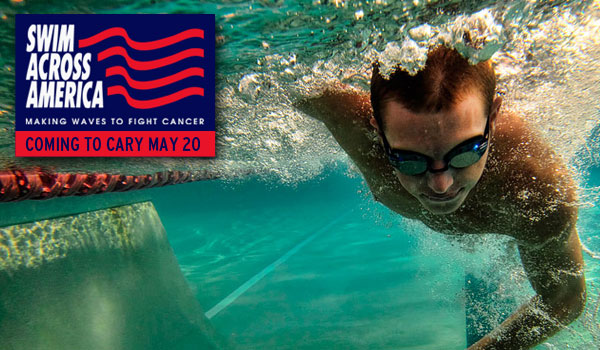 Story by Hal Goodtree. Special thanks to Mary DeMilia. Photo by Lost-In-Maylene.

Cary, NC – For 25 years, Swim Across America (SAA) has been raising money for fight cancer. Now, with the support of Triangle Aquatic Center, this iconic event is coming to Cary on May 20, 2012. Show your support by signing up or sponsoring a swimmer.

The One-Legged Man Who Ran Across America

Swim Across America is the inspired sequel to a triumphant Run Across America completed by the two founders of SAA in 1985. This eight-month journey, which spanned the country from Boston to Los Angeles, raised over $1 million for cancer research.

What makes this trek all the more remarkable is that one of the determined runners, a 22-year-old from Fairfield, CT, had lost his right leg to cancer a decade before. Following college graduation, these two childhood buddies embarked on their mission, making history in the process. Together, they instilled hope in all who fight this disease and heightened consciousness about overcoming this frightening diagnosis.

It was in 1987 that Jeff Keith and Matt Vossler decided to bring their cause back home and transitioned from running to swimming for a cure. With a focus on raising money and awareness for cancer research, prevention and treatment, Swim Across America was chartered as a 501c3 nonprofit organization.

Swim Across America in Cary

SAA has dozens of events across the country, each with its own flavor. In San Francisco, they swim under the Golden Gate Bridge.

In Cary, Triangle Aquatic Center has donated the 50m competition pool for the event on Sunday, May 20, 2012.

SAA/Cary is more than just swimming:

You can sign up as an individual or as a team. If you don’t want to swim, you can make a donation to SAA or sponsor a swimmer.

Lots of volunteers are needed as well – lifeguards, timers and organizational help.