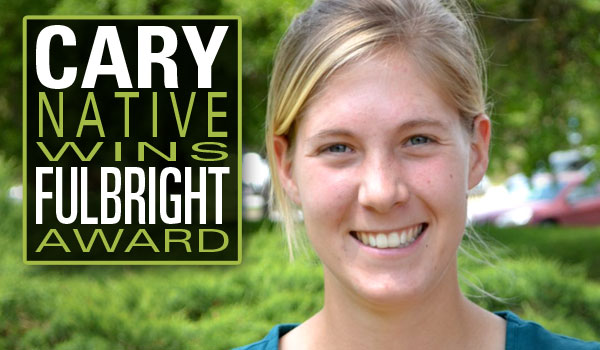 Story and photo by Joan Conwell.

Cary, NC – When she was at Martin Middle School, Cary native Leslie Willis discovered a love of travel through her grandmother, whose photo books, adventure stories, and spur of the moment trips captivated her. A decade later, she has been awarded a 2013 Fulbright grant to teach English in Malaysia.

The University of North Carolina graduating senior has traveled to Egypt on a People-to-People exchange, volunteered in an orphanage in Ghana, taught health and sanitation to young girls in Uganda, and educated American school children about the world beyond our borders.

It was while studying at the UNC library several weeks ago that Ms. Willis received email notification that she had been accepted into the Fulbright English Teaching Assistantship Program. When asked about her response to winning one of the world’s most prestigious grants—Fulbright alumni include 43 Nobel Laureates and 78 Pulitzer Prize winners—she said, “I can’t believe it’s me. I sent a frantic email to my family with tons of exclamation points.”

Willis leaves in January 2013 for ten months of teaching English somewhere outside of the Malaysian capital of Kuala Lumpur. She knows French and Spanish, has studied Swahili and picked up a smattering of local languages wherever she travels, so we can expect that she will return from her assistantship familiar with Malay, Tamil, and Mandarin, the three official languages of Malaysia.

Her leadership qualities and her interest in diverse cultures were evident early in life. Willis spent six years during middle and high school serving on the Cary Teen Council. She represented the council on the Town of Cary’s Sister City Commission for two years. Cary Sister Cities promotes cooperative exchange between Cary and international cities worldwide, and is part of a larger global community working towards peace. Willis traveled on a youth exchange to Cary’s sister county—County Meath in Ireland—and remembers the excitement and satisfaction of community building with dignitaries there and later taking those same Irish officials on a tour of local cultural sites when they visited Cary.

Ed Yerha, who served on the Sister Cities Commission at the same time as Willis said, “It was clear to us all that Leslie was destined to go places….literally and figuratively!  We couldn’t be more proud.”

Observing extreme poverty during her later exchange trips and forging connections with the local people she meets have helped shape Willis’ view of the world.

“From our perspective as a western society we think, ‘oh, poverty, how can they be happy, they have nothing.’ But then you go and think: ‘but they have so much more than we do in terms of community, in terms of compassion, in terms of love and understanding.’”

It is that sense of community and understanding that she hopes to bring back to American middle school classrooms when she returns from Malaysia.

Although Willis knows she wants to share her knowledge and passion for culture and development with young teenagers still forging their identities—she isn’t ready to pin down exactly where or how she sees her future career unfolding.

“I want to go everywhere,” she said. “The problem is narrowing it down.”