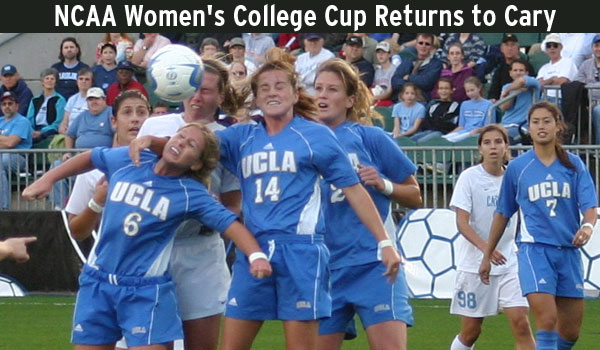 Story by Hal Goodtree. Photo of 2006 College Cup in Cary by Jarret Campbell.

Cary, NC – The NCAA has announced that the Division 1 Women’s College Cup will return to Cary in 2013. The College Cup is the championship tournament of NCAA soccer.

In a statement from the NCAA:

The 2013 Men’s championship will be hosted by Villanova and played in Philadelphia, a first for the City of Brotherly Love.

Cary will host the tournament on December 6 and 8, 2013 at Wake Med Soccer Park, hosted by Campbell University.

I was at a RailHawks game last night and the construction of the new seating is well under way. The remodeled stadium will hold about 10,000 fans.

The expansion no doubt helped return the College Cup to Cary. Raising attendance for college soccer is a key goal of the NCAA, and that means bigger venues.

Add in events at USA Baseball, Cary Tennis Park and the SAS Championship and we’re talking a lot of money.

Here’s how I understand economic impact: visitors spend the money in hotels and restaurants. Those places hire more people, or work their staff more hours. The workers have more money, some of which goes to meals in Cary, shopping in Cary, a show at Booth Amphitheatre or a new car at AutoParkMall.

The NCAA had this to say about Cary:

Well-earned congratulations to Town of Cary staff, Wake Med Soccer Park, Campbell University, the Cary Sports Alliance and all those who worked to bring the College Cup back to Cary. Score one for the home team.

Letters: Paul Stam on Amendment One
Scroll to top