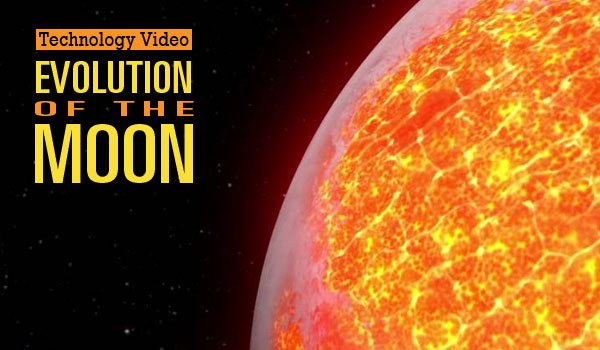 Evolution of the Moon

It starts as a fiery mass, gradually cooling into a smooth sphere, a little like a golf ball.

About 4.3 billion years ago, a massive object strikes the south pole of the Moon, creating the Aitken Basin.

From 4.1 billion to 3.4 billion years ago, the Moon was showered with a heavy bombardment of meteors, like a rain of fire from space. Scientists call this basin formation.

For almost 3 billion years, seas of fire covered large parts of the moon. The period of Mare Vulcanism lasted until about 1 billion years ago, creating the dark “seas” we can see from Earth.

At the same time, a shower of meteors continued to rain down on the Moon during a period of intermediate cratering.

For the last billion years and up until today, a mild shower of meteors continues to strike the Moon in a process called ray cratering.

The video features animation on top of new high-definition pictures of the Moon’s surface.

Scientists at NASA’a Goddard Space Flight Center have learned more about the history of the Moon from the pictures sent by the Lunar Recon Orbiter.

Video: Evolution of the Moon

This beautiful to watch video can also be seen on Youtube. Show it to your kids with a nonchalant “check this out.”

You can also watch previous videos in our S.T.E.M. series.