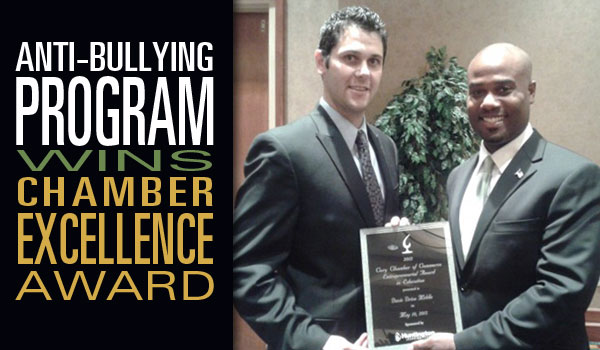 Cary, NC – Bullying among school kids may be a disheartening fact of life, but one Wake County School created their own program to empower students using positive reinforcement for good behavior coupled with technology. They got results, and recently won the Cary Chamber Entrepreneurial Award in Education for 2012.

Davis Drive Middle School is known for its high achieving students, but what 7th Grade Vice Principal Richard Williams and Lead Guidance counselor Phillip G. Echols saw last school year was a school with bully problems and a student body that was becoming  dysfunctional. They decided to do something about it through a new character education program they created called Stand Up.

“If you don’t stand for something, you’ll fall for anything.”  Their goal is to promote character education, exemplify school spirit, and to substantially decrease bullying at Davis Middle.

In their own words: After a challenging year of increased suspensions, staff burnout, and student distress the pair decided there was a need  to create an effective reminder of why we all enter the school building every morning.  We needed to be reminded that respect is a two-way street and that we are all in this together.  Stand-Up has evolved into our very own display of admiration for our Davis Drive community.

To promote the program, video footage from a wide range of school events (i.e. pep rallies, sporting events, guest speakers, performing arts, and hallway transition), is edited, set to music, and produced into a 2-minute clip that plays every Wednesday during homeroom. The monthly character trait message is emphasized in these weekly videos, but also reinforced with posters, fliers, bulletin boards, guest speakers, and classroom guidance lessons.

The result: Stand-Up has improved school climate, as well as the working environment for staff.

These videos were shown as part of the Stand Up program last fall. Please watch and share with your friends and family.

You can also visit the DDMS Stand Up Channel on Vimeo. How cool is that?

The program highlights monthly positive character traits and makes use of video taken of students “caught in the act” of displaying positive behavior. Rewards that include rubber wrist bands are handed out to students who exhibit positive behavior and these bands became status symbols within the student body.

Examples include “Words Hurt” during Anti-Bullying month and “Stop and Think” for Good Judgment.  Each month has its own wristband which displays the color, as well as the slogan or character trait of the month.  Wristbands are not given frivolously, but they are earned through teacher recommendation, displaying the character trait, or by participating in the weekly Stand-Up video.

Our nation is faced with a bullying epidemic and our community needs daily reminders that kindness, courage, and respect for others is the path to making things better.  We are using technology and social media to connect our community, promote positivity, and to raise awareness.  As we move forward in the 21th century, we are excited to see what the future holds for our motivating initiative, Stand-Up.

Wouldn’t you like to see this  initiative  at your school? Or perhaps rolled out to all of Wake County and beyond? Email Echols or Williams, or better yet, the Board of Education.

This program speaks to kids on their level as no amount of preaching ever will.