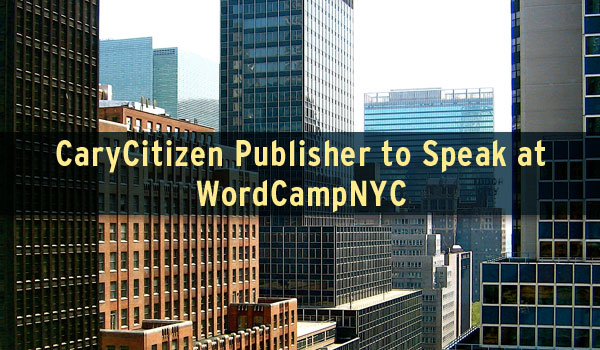 Cary, NC – CaryCitizen Publisher Hal Goodtree has been asked to speak at WordCampNYC. It’s the largest WordPress conference in the world and is taking place this coming weekend at Baruch College in Manhattan.

WordPress – The New Giant in Publishing

WordCamps are a worldwide phenomenon of conferences about WordPress, a open source web publishing platform. CaryCitizen is published on WordPress.

Over 74 million WordPress-powered websites exist around the world. Notable users include TED, CNN, TechCrunch and the National Football League. According to WordPress.com, over 350 million people view more than 2.5 billion pages each month.

CaryCitizen is a 2011 Knight Foundation Fellowship Award Winner and has been written about in the Columbia Journalism Review. Founded in 2009, CaryCitizen has grown readership to more than 74,000 a month.

WordCampNYC 2012 will be broadcast on WordPress.tv.