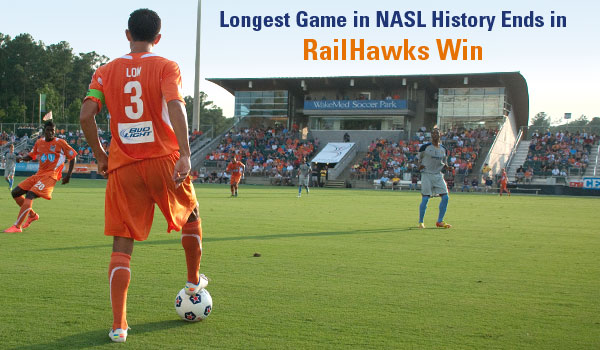 Cary, NC – The Carolina RailHawks match against the Minnesota Stars FC last night was delayed for 4 hours. The RailHawks were able to come away with another win, 1-0, despite nature’s fireworks. The match was the longest game in NASL history and was completed in the wee hours Sunday morning.

The evening started off under sunny skies with a pig pickin’ cook-off and BBQ festival. 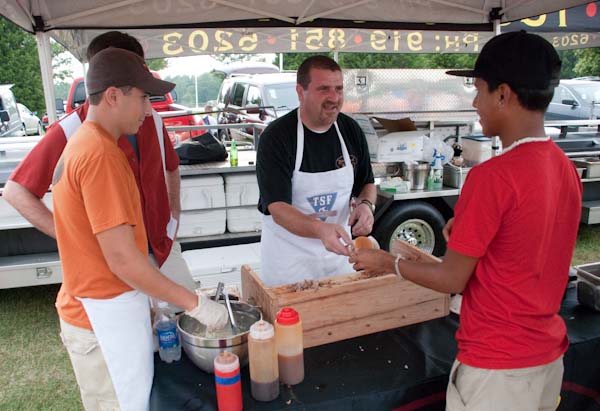 The beer flowed, a band played and fans reveled as the blue smoke of a true Carolina barbecue wafted into Cary sky. 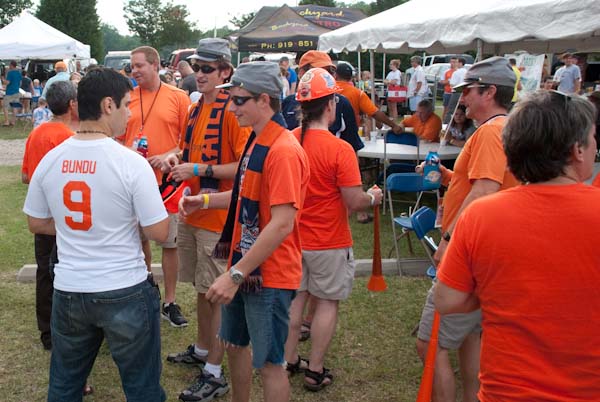 Proceeds from the event went to The Food Effect  and the RailHawks Spread Your Wings Charity. 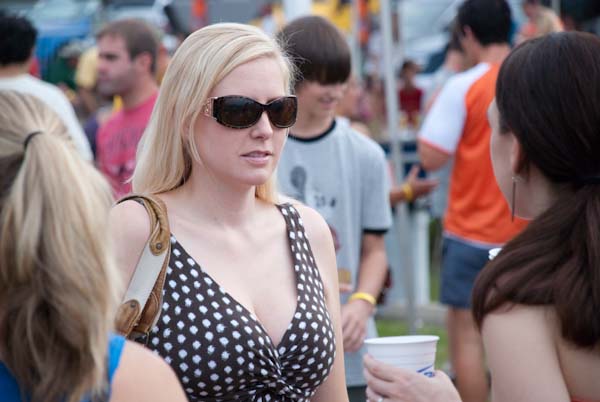 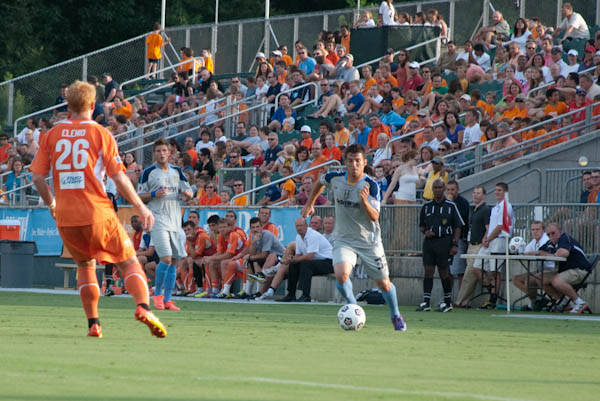 Ten minutes into the game Mike Palacio crossed the ball to Zack Schilawski to give the Cary home team the only goal they would need to win and move to within 2 points of Minnesota in the standings. 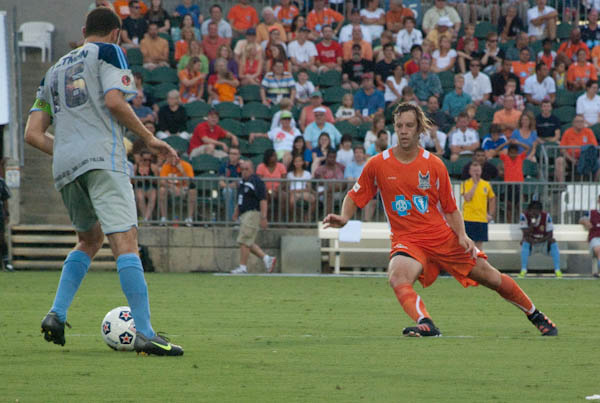 The Stars gave the hometown team fits with a few near misses, one of off a corner kick and the other a blocked Amani Walker shot by Carolina defender Gale Agbossoumonde. 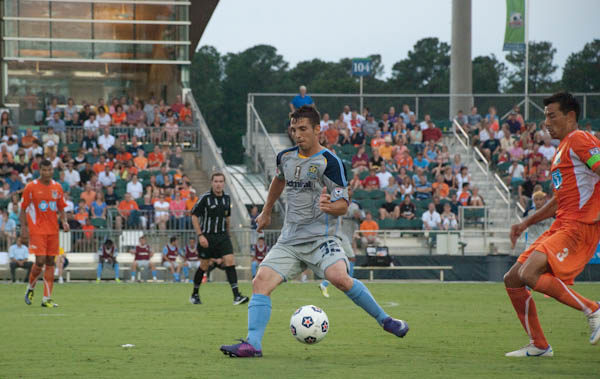 The Railhawks had several chances of their own as the 1h wound down. 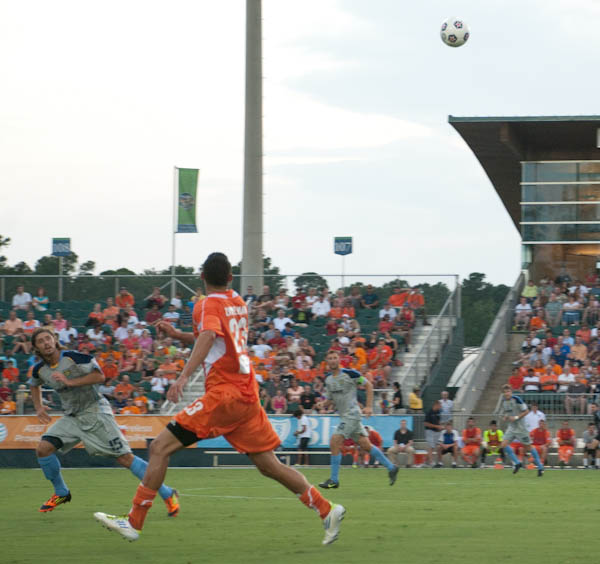 Early in the second half, the games was stopped as the wild lightning show began. Both coaches must agree to end a game and put it in the books, but understandably, Stars coach Manny Lagos refused. And they waited…

When the game resumed – after midnight – the Stars played with a purpose and had two Neil Hlavaty shots nearly hit pay dirt. Geison Moura missed a great opportunity to tie it up but went wide.

In the 77th minute RailHawks’ Kupono Low got his second yellow card for jawing with the ref and the ‘Hawks played the rest of the game one man down. 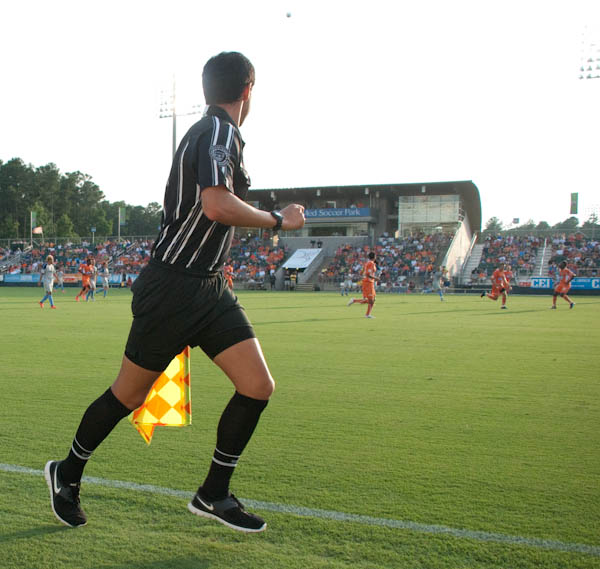 Stars’ Justin Davis had another great chance when his shot bounced off the Carolina cross-bar.

Carolina held on tight for the win. 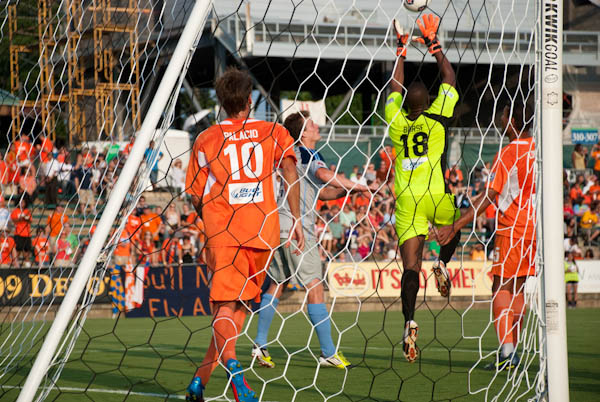 Many fans stayed home because of the weather or left early when the stands were cleared due to lightning hazard at the start of the second half.  The RailHawks announced that fans with July 21st tickets may return them for a Buy 1, Get 1 offer. For more information contact the Cruizers Box Office at 919-459-8144. 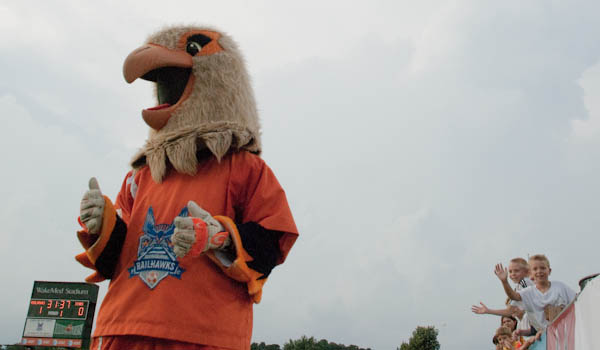 In Other NASL News…

The Carolina RailHawks have announced the signing of midfielder Floyd Franks. Franks is returning the Carolina after playing with the Vancouver Whitecaps FC of the MLS.

Franks is a local product having played at the University of North Carolina at Charlotte. He was the 10th pick in the 2006 MLS Supplemental Draft.

The NASL has also announced the New York Cosmos of my childhood will be rejoining the NASL after almost 30 years in 2013. The New York Cosmos started in 1971, and last won the NASL Soccer Bowl in 1982. The team had such superstars as Pelé, Giorgio Chinaglia and Franz Beckenbauer and helped to put American soccer on the map.

The RailHawks will travel to San Antonio to play the first place Scorpions on July 28th at 8:45 PM ET. The RailHawks will be back home on Saturday, August 4th at 7:00 PM to play the Tampa Bay Rowdies. For more information about upcoming matches and events, contact the Cruizers Box Office at 919-459-8144 or by email at tickets@CarolinaRailHawks.com.

Pictures of Cary Scavenger Hunts Past