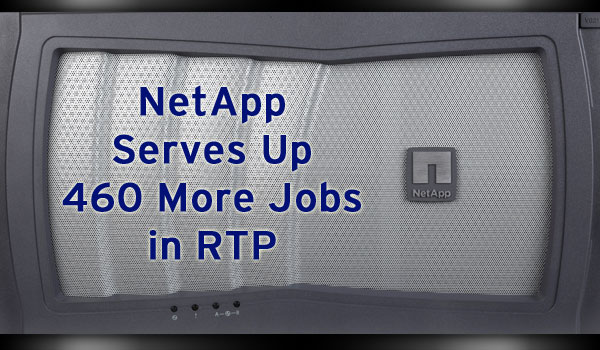 Cary, NC – NetApp, one of the world’s largest providers of storage and data management solutions, announced on Monday that it plans to create 460 new jobs in RTP over the next four years.

Gov. Bev Perdue made the NetApp announcement on Monday. The company plans to create 460 new jobs over four years and invest more than $75 million into a new R & D facility. The project was made possible in part by a state grant from the Job Development Investment Grant (JDIG).

“North Carolina is a tremendous place to do business and our highly-skilled workforce is equipped to support high tech companies like NetApp in their desire to expand here,” said Gov. Perdue.

Headquartered in California, NetApp is a Fortune 500 company that employs over 12,000 individuals in more than 170 offices worldwide, including more than 1,400 employees in its RTP facility. In 2011 NetApp ranked #1 on the Triangle Business Journal’s annual ‘Best Places to Work’ in RTP list. It marked the seventh time that NetApp has appeared on the list and the third time it has been ranked #1.

History in the Triangle

“NetApp has a great history in the Triangle, and we’re pleased to see the company continue to grow here,” said Sen. Josh Stein of Wake County. “I’m confident that our well-trained workforce and business-friendly climate will help them remain successful.”

The new RTP data center will have a private cloud environment to provide virtual access for NetApp engineering labs around the world. It will also serve as a model for customers interested in building energy-efficient dynamic data centers and cloud environments for their enterprise users.

Compensation will vary by job, but the average annual compensation for the new positions will be approximately $100,000, plus benefits.

The state Economic Investment Committee voted to award a Job Development Investment Grant (JDIG) to NetApp.  JDIGs are awarded only to new and expanding businesses and industrial projects whose benefits exceed the costs to the state and which would not be undertaken in North Carolina without the grant.

Under the terms the grant, the company is eligible to receive a grant equal to 65 percent of the state personal income withholding taxes derived from the creation of new jobs for each of the 10 years in which the company meets annual performance targets.

If NetApp meets the targets called for under the agreement and sustains them for 10 years, the JDIG could yield as much as $11.78 million in maximum benefits for the company.

As well, up to $3.92 million could be added to the state’s Utility Fund for infrastructure improvements in economically distressed counties. When a JDIG is awarded in the state’s more economically prosperous counties such as Wake, 25 percent of the grant is allocated to the Utility Fund to encourage economic development in less prosperous counties.