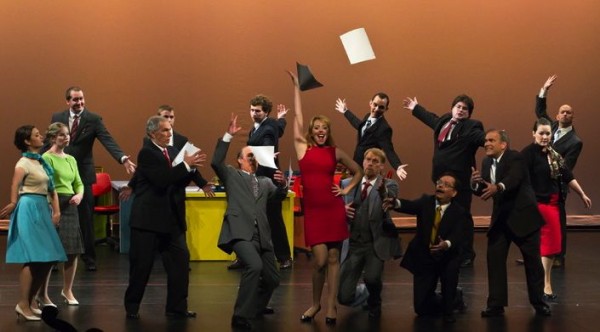 Theater review by Lindsey Chester, all photos by Brooke Meyer.

Cary, NC – In it’s second season as residents of the Cary Arts Center, the Cary Players have once again created a production that is a delight for the eyes and ears with How To Succeed In Business Without Really Trying.

The play by Frank Loesser is set in the world of the 1960’s Mad Men-era and the costumes by David Serxner set the tone superbly with tight skirted secretaries and big-suited self important bosses. John Dietz has outdone himself with the moveable stage set pieces that recreate the offices, mailroom, steno pool, and, best of all, an elevator bank of the World Wide Wicket Company where the action takes place.

How To Succeed is a musical comedy direct from the era when secretaries won’t ever rise above the steno pool, and instead focus their ambitions on catching a man so they can drive a station wagon in New Rochelle (home of the old Dick Van Dyke Show).

What is timeless, however, is the striving of the main character, J. Pierpont Fitch (hilariously portrayed by Kevin Roberge), who ingratiates himself to every boss on every level as he rises up the rungs of the corporate ladder. 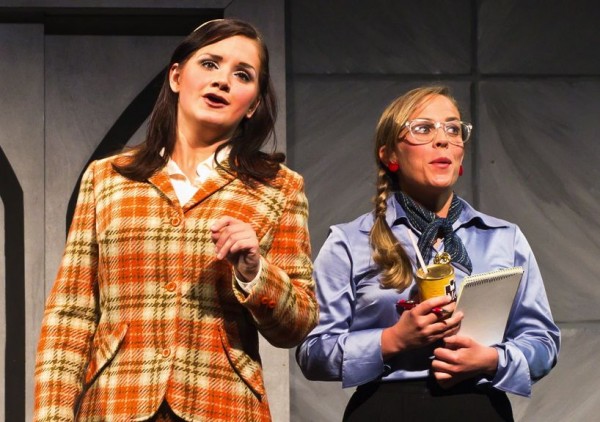 Poor Rosemary, (Sarah Winter, with a voice as big as Broadway) fixated on landing a company man for a husband has set her sites on Fitch, only to be snubbed time and again as he uses every trick from his secret business guide , “How to Succeed In Business” to gain promotions until he ends up in a level over his head. 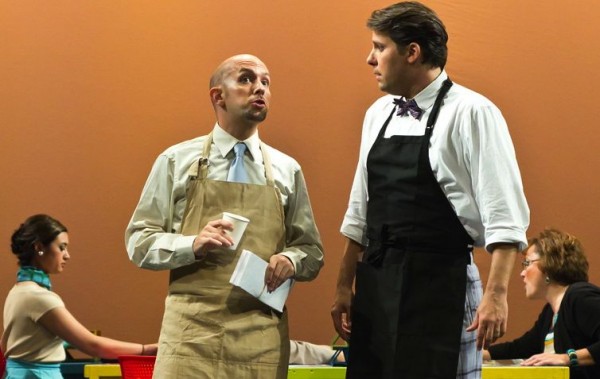 There are many twists along the way. Nepotism is the rule of the day at World Wide Wickets.  Characters include the self-important boss, Biggley (Jim Burnette) who has a sweetie, Hedy La Rue (wickedly by Ann Davis), complete with red hot dress, bombshell hair and stilettos, whom he installs as Fitch’s secretary.

There’s Biggley’s scheming nephew, Bud Frump (played splendidly by Jaret Preston) who has his own dreams of success and how to achieve it. Leagues of  Yes men who love the company way, and eager secretaries like Smitty (Natalie Turgeon, in her second Cary Players production) make everything work at the office.

The chorus of men dancing in business suits and secretaries styled from the sixties makes for great spectacle in the office scene number, “A Secretary’s Not a Pet”.  Serxner’s adept at evoking an era and this play is no exception. He uses costume change to great effect for the Fitch character to visually connote his rise in status throughout the show, from window washer in coveralls to natty suit as head of advertising.

Nancy Rich has done a fine job of directing the action and the scenes move along at a swift pace as set pieces are moved and the action picks up speed towards intermission. 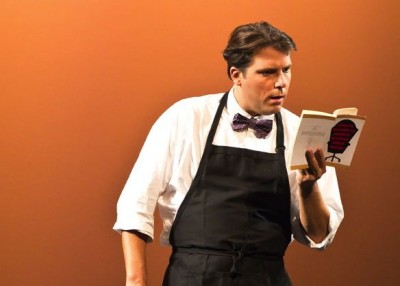 Somehow with twists and turns, Fitch rises to the top listening to the advice from his secret guide and by intermission he has risen meteoricially.

Will Fitch and Rosemary ultimately succeed in their goals? Does Biggley get found out as a philandering Big Boss? Will Bud have his way and become a boss with his mother’s help?

Find out for yourself and have a rollicking good time escaping to an era of low unemployment where the toughest decision was your lunch date. The play opened Friday Sept 29, for a 2 weekend run and continues this weekend.

Cary Players produces How To Succeed in Business Without Really Trying

(All performances are at the Cary Arts Center, 101 Dry Avenue.)