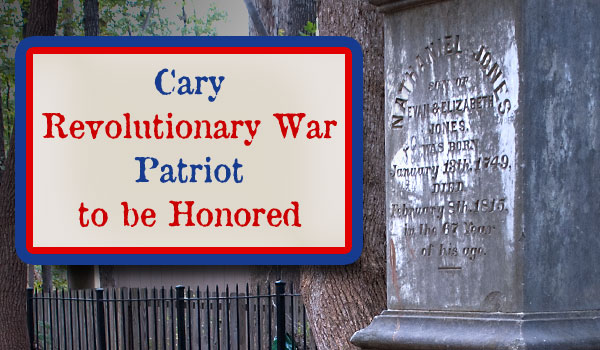 It is believed that Nathaniel Jones of White Plains is the first Revolutionary War patriot to be honored in the town of Cary.

Muskets Will Be Fired

A Life Of Service

Nathaniel Jones of White Plains (1749-1815) was a prominent North Carolinian whose life spanned the Revolutionary War and Federalist eras. Jones served as a Wake County Commissioner, Justice of the Peace, Sheriff, and Clerk of Court, and was a member of the General Assembly, the Council of State, and served as a delegate to the Constitutional Convention in Hillsborough in 1788.

Cemetery One of Oldest Cary Sites

Archaeology reveals at least nine other graves in this traditional family plot, which is located at 100 Tolliver Court in the Maynard Oaks Subdivision of Cary. The DAR event follows a Remembrance Day ceremony held in October 2011 marking the completion of the restoration of the White Plains Cemetery by the Friends of Page-Walker and the Town of Cary. It is one of the oldest historic sites that links our present day community to its 18th century settlement.

Decorating: A Guide to Kitchen Countertops

Citizen Engagement and Town of Cary
Scroll to top