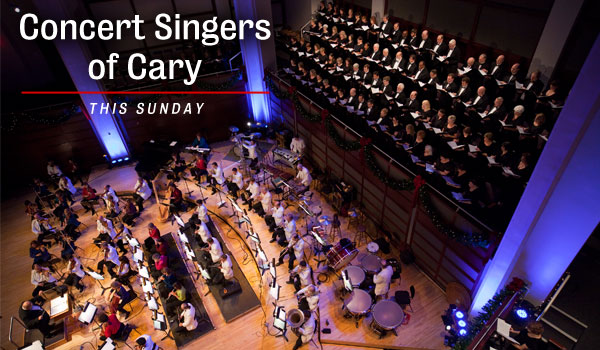 Cary, NC – The holidays seem to have already arrived here in Cary, with retail Open Houses, music in the stores, and this week a wonderful musical kick-off to the season from the Concert Singers of Cary.

The Concert Singers will perform their show titled “Let the River Run: Musical Landscapes of American Music and Poetry”, Sunday, November 18th, at 3:00pm in the Cary Arts Center.

It promises to be as ambitious as their shows always are: this time mixing the diverse sounds of Dolly Parton, Carly Simon, and Samuel Barber.The concert will also feature projected works of American visual art to accompany each piece of music on the program.

For over 20 years, The Concert Singers of Cary have been known for their outstanding performances of choral music not only in Cary but also throughout the Triangle. Now a resident performance arts group at The Cary Arts Center, they are seen regularly with The North Carolina Symphony at Meymandi Hall in Raleigh and at the Koka Booth Amphitheater in Raleigh . In addition, they also appear regularly with The Chamber Orchestra of the Triangle at The Carolina Theater in Durham.

Under the leadership of founding director Lawrence Speakman, The Concert Singers of Cary have received critical acclaim, not only for their outstanding performances but for their creatively diverse programming.

“We have always tried to present a variety of programs because there is so much wonderful music out there.” Speakman says.

This year is typical with the usual Pops and Classical concert offerings, but the program on November 18th is a new venture that weaves modern and classical composers with arrangements by popular artists.

Always up for a challenge, conductor Larry Speakman had this to say about the upcoming show:

“Some of my colleagues thought I was losing my mind when they heard we were putting together a program that combined classical American composers Samuel Barber and Libby Larsen with music by Carly Simon, Annie Lennox, and Dolly Parton. The reality though is that these popular artists are, in some ways, our living poets. We have created a musical collage where the common thread of all the music is about the beauty of the world in which we live.  So, when you hear Barber’s Sure on This Shining Night next to Dolly Parton’s Light of a Clear Blue Morning, they seamlessly  flow and fit together  in a beautiful and harmonious way.”

Post Concert there is an opportunity to meet the performers at the local wine bar, UnWine’d at 201 West Chatham Street – within walking distance from The Cary Arts Center. Show your ticket stub and receive a 15% discount off your bill.

$18 for adults and $16 for seniors 60 and up
Purchase at The Cary Arts Center or online at www.concertsingers.org.
STUDENTS OF ALL AGES ADMITTED FREE.

Events coverage on CaryCitizen is sponsored in part by Once Upon a Child in Cary, buyers and sellers of gently used cloths, toys and equipment.