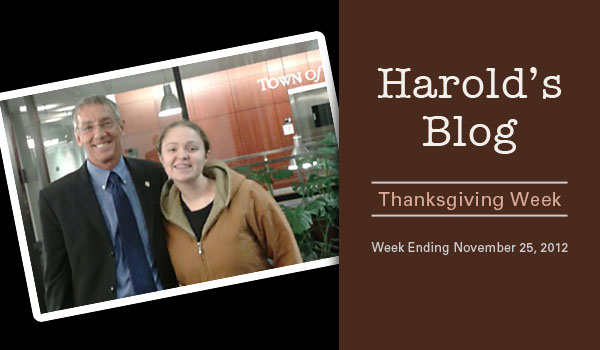 Cary, NC – This week was a holiday week so there were not many mayoral duties to perform.

Monday night, the Wake County Mayors Association met with 11 of 12 mayors in attendance.

Mayor Frank Eagles (Rolesville) was elected as the new President and will preside in 2013. Mayor Nancy McFarlane (Raleigh) was elected Treasurer.

Mayors discussed post-election impacts on their towns. Mayor Keith Weatherly (Apex), who works for Representative Stam, stated the Republican legislature can pretty much do what they want regardless of who is in the Governor’s mansion.

Mayors also discussed building activity in their towns. All reported activity was picking up. Mayor Tim Hinnant (Wendell) said they are reviewing a project that will double their population.

The mayors will hold their annual Christmas Party on December 17th at the PNC Center. Cost is $48/person and invitations will be coming out shortly.

Tuesday I had an interview with Anna Claire Stark, a student at St. Mary’s, who was assigned to interview and write a paper on courage with an elected official. She chose me.

Our conversation lasted about an hour and was a lot of fun.

The rest of my week was spent with family enjoying the holidays. Thanksgiving dinner once again included my Aunt Fellas Bond (wife of former Mayor Fred Bond) and some of her family.

In my spare moments over the holiday I wrote the State of the Town address. In writing it one thing was abundantly clear, Cary truly is the best place to live, work, and play in America.

In the media this week Cary was recognized has having the second best water by the North Carolina American Water Works Association (NC AWWA) in its annual tap water taste test on Nov. 13. Charlotte-Mecklenburg was awarded first place.

Cary has been in the top two six times since 2002.

In the news this week the local newspaper printed an article that was misleading regarding the Koka Booth amphitheater.

Their premise was that Cary raised decibel levels to make more money despite complaints from neighbors. In addition, they pointed out that Cary loses money at the amphitheater. While there is some truth in these statements they are, as usual, spin.

Like all Cary venues, they generate millions of dollars in economic benefit which far exceeds the costs.

Emails this week were mostly positive. Only one complaint this week from the same individual that complains on a weekly basis about pretty much everything we do. Anyway, I received several very nice emails with holiday wishes and invitations to holiday functions.

Next week includes a visit to an elementary school, a trip to bond rating agencies in New York, and two Christmas tree lightings.

Well that is all for this week. My next post will be on Sunday December 5th. Please feel free to email me with a comment.

Email all Town of Cary questions or comments to Harold.Weinbrecht@townofcary.org. Email personal comments to augustanat@mindspring.com.