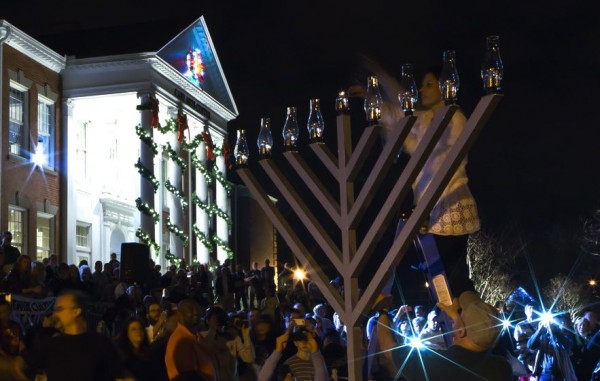 Cary, NC- For the second year, the Town of Cary has partnered with Chabad of Cary, the Jewish Federation of Raleigh-Cary and Temple Beth Shalom to bring the town a festival to celebrate Hanukkah. Cary lit the large public menorah on the second night of the holiday, this past Sunday.

For the first time, a Jewish marketplace offered gifts for the holiday season for sale. A schedule of performances began at 3 and continued with the headline act of Ruslan Sirota and Rick Coffey after the menorah lighting ceremony.

In Principal’s Hall on the main floor, BookHarvestNC was collecting books for donation. This local organization makes sure to distribute books to children.

Kosher refreshments were for sale in a large tent set up with tables across the street on the Performance green.

The menorah was lit at 7pm near the steps leading up to the entrance to the arts center. Councilwoman Lori Bush kicked off the ceremony with a welcoming speech about how Cary’s diversity is also what makes the town such a  desirable place to live.

Barry Schwartz of the Jewish Federation described the miracle of the legend of the supply of oil that instead of lasting for one day, burned for eight. He continued that this symbol can be used to represent freedom. Not only religious freedom, but also freedom from hunger and the things that afflict us in society. He thanked the Town of Cary for graciously supporting this event.

In its second year, this partnership is planned to continue to make this an annual Cary event.