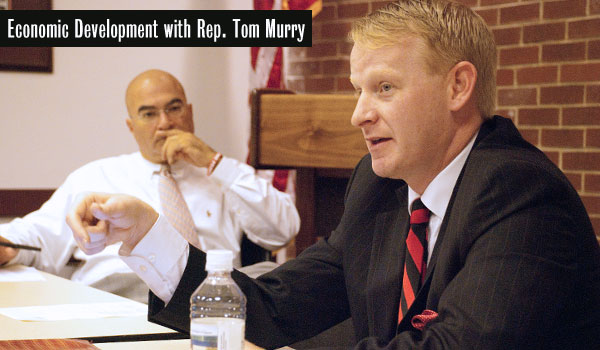 Cary, NC – On Thursday, Rep. Tom Murry was the guest at the Cary Chamber Business Roundtable breakfast. The talk range from regulatory and tax reform to education, energy and entrepreneurs.

Tom Murry represents District 41, which includes many residents of Cary, Apex and Morrisville. He is also Chairman of the Commerce and Job Development Committee and Vice-Chairman of the Regulatory Reform Committee of the North Carolina House of Representatives.

Rep. Murry  began by talking about regulatory reform. He said he supports a 10-year retirement, or “sunset,” of all existing regulatory rules. In short, review regulations every ten years, re-approve, change or delete rules that didn’t work or are no longer necessary.

Tom Murry is a tech-savvy guy. He has had a popular and informative Twitter stream for several years. The next topic on the iPad in front of him at the Chamber was tax reform.

Tom explained that during the interim between sessions, the issue of tax reform and modernization was being considered by the NC Senate. During this same time, the House was taking up the issue of Unemployment reform.

“$3 billion in the hole,” was the figure Rep. Murry quoted about unemployment-related debt. He said a plan of “shared sacrifice” and a “balanced approach” could “retire the debt by 2018.”

Murry mentioned eliminating corporate tax at the state level. He said it was just a “stealth tax” passed along to consumers.

He also talked about phasing out tax credits, or “loopholes.” Rep Murry mentioned both solar power and agriculture.

Murry talked about the large scale of the challenges facing the General Assembly, with big, complicated issues and a “long session” that only lasts until May or June.

He joked, “I’m going to change my political affiliation to ‘incrementalist.'”

Rep. Murry said his overriding concern on tax and unemployment reform was to “stabilize revenues so we can weather any storm.”

Next on Tom’s iPad was a discussion of education. He said he favors giving teachers and schools more flexibility to “teach what they want, when they want.”

He mentioned that “the DPI (Department of Public Instruction) doesn’t have rules, it has policies.” Murry continued, “that’s a problem. That’s a house of cards.”

He said he supports pay for performance in schools and noted that “my mom was a school teacher.” Murry said “they did this in Colorado. The union was at the table and, in the end, they endorsed it.”

“I think we should have this conversation,” Murry said. “We won’t get anything done by rolling over anybody.”

In between some other things, Murry also made mention of spending cuts through energy modernization and IT consolidation.

Currently, Murry said many different departments all run their own IT (information technology). He said “cloud computing” had yet to make an impact in the General Assembly.

After about 45 minutes, Rep. Murry opened the floor for questions.

One question concerned Medicaid reform – who’s eligible. “Changing it is going to be a tough sell,” Murry responded.

Tom also predicted the duration of the long session of the NCGA – “We’re leaving before Memorial Day or shortly thereafter.” The previous long session (in 2011) ended in July.

The Business Roundtable with Rep. Tom Murry was a free benefit of membership in the Cary Chamber. It even included a hot breakfast and fresh fruit. Join now. 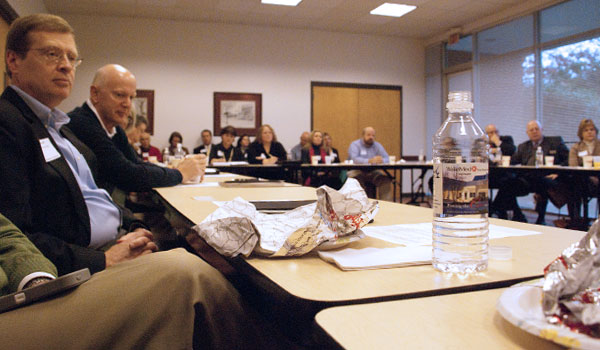