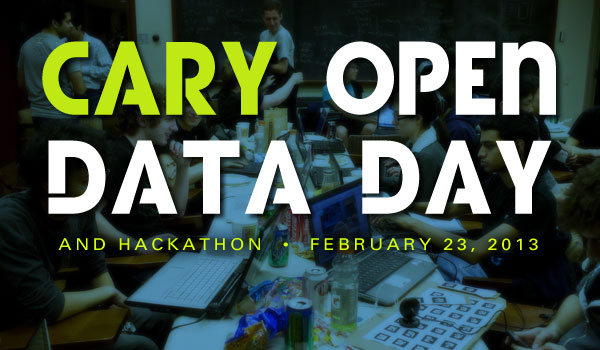 The Open Data movement is about utilizing the massive amount of information on the web about our towns and communities. From International Open Data Day:

[Open Data Day is] a gathering of citizens in cities around the world to write applications, liberate data, create visualizations and publish analyses using open public data to show support for and encourage the adoption open data policies by the world’s local, regional and national governments.

But Open Data is just a stream of information until someone (or some group) turns it into a useful application. It could be a website about traffic, a mobile app about parks or visualization of energy usage.

Open Data Day is open to everyone.

If you have an interest in technology or a skill to share, register now.

Hosted by: Cary Chamber of Commerce

41 cities across the world are participating in Open Data Day, including London, Paris, Rome, Berlin, Shanghai and Tokyo. In the United States, only six cities have signed up:

Cary Open Data Day is the brainchild of Ian Cillay, a Cary developer and member of TechnologyTank.org, the successor to Town of Cary’s Tech Task Force.

Cary’s first Open Data Day is being hosted by the Cary Chamber of Commerce, leading the charge on technology and information in our fair town.

18 people have signed up in Cary as of January 24. With about a month to go until the event, Cary Open Data Day promises to be a lively event.

News coverage on CaryCitizen is sponsored in part by Thai Spices & Sushi at the corner of Cary Parkway and High House Rd.