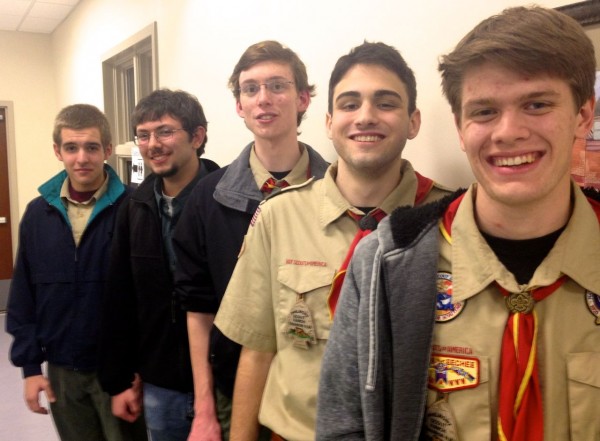 Cary, NC – Our area has an active scouting culture, with many parents signing kids up in elementary school. But few stick with the scouting commitment all the way to Gold Projects or Eagle Scout status. But Boy Scout Troop #316 at St Andrews Catholic Church in Apex has had 35 members achieve Eagle Scout status, the highest honor in Scouting.

What does it take to achieve Eagle Scout, and who are these accomplished young men? Dwight Jones, Scoutmaster for Troop 316, joked:

I think that every person out there has a perception of what an “Eagle Scout” is, but very few really know what is involved to get to that level.

Some people hear “Boy Scout” or “Eagle Scout” and picture a nerd from the movie Animal House, with black rimmed glasses, high-water pants and 4 ink pens in his front shirt pocket. Not true… most Eagle Scouts are athletic and/or excel in some extra curricular activity outside of scouting. In fact, two of my most recent are freshman this year at Notre Dame, one of them will be joining the football team this month when training resumes.

Dwight’s group meets every week on Tuesday nights  just outside of Cary off Rt 64 in Apex. The boys range in age from 11- 18.

Each night the group organizes into “patrols” of about 8-12 kids and they work to decide activities and plan trips. Every 6 months they elect patrol leaders –  typically 15 of the 50+ will land a job. Holding various troop jobs are one of the requirements for a boy to move up through the scouting ranks.

These elections teach the boys how to make a pitch for themselves. They have to speak up publicly and actively “campaign” to win a leadership role. 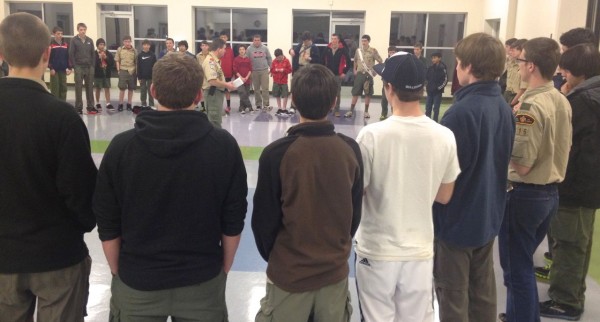 At the close of each meeting the large group comes together to review decisions and make announcements. This active planning is what helps keep the kids interested.

Every month there is a field trip, planned and organized by the troop members, not the adults. These trips range from an overnight indoor rock climbing adventure to hiking and camping at state parks, or even traveling as far as New Mexico on High Mountain adventures, planned years in advance.

I asked Dwight why so many of his troop have stuck with it all these years. He mentioned that around the age of 15, many kids are at risk of dropping out because of what he called “fumes.”

‘The fumes of cars and driving, and the fumes of perfume from girls. These two combined cause many teens to drop out of scouting,” Scoutmaster Jones said.

So why, then has Troop 316 had 35 boys achieve the highest level in scouting? Dwight said “the fun is contagious, and for many, the guys in the troop are their best friends, who have shared experiences like no others they know.”

They have hiked, camped, shot guns, rock climbed, gone on high mountain adventures across the country, caved in the depths of the earth. Why wouldn’t they want to keep going with that?

“I’ve done stuff I never would have done if not for scouting” was a phrase I repeatedly heard on my visit, not only from the boys, but from the leaders..

Universally, the scouts said that their favorite activity has been “high adventure trips” where some members of the troop have traveled to New Mexico back packing and hiking in high altitudes. Its not for the faint of heart, or the younger members, as each boy must carry everything he needs on his back including all food, water and camping gear.

These trips are planned years in advance, as many troops from around the country apply to participant and  are placed on waiting lists.

More than two million Scouts—only 4% of overall Scout membership— have claimed the rank of Eagle Scout. Yet it’s the overwhelming vision and desire of nearly every Scout.- from Boy Scouts of America.

The 5 levels of Boy Scouting:

Additional requirements include demonstrating Scout spirit by living the Scout Oath and Law in everyday life, taking part in a unit leader conference, and successfully completing a board of review.

At the Life Scout level boys begin to plan their Eagle Scout Project. Maybe they see an unfilled need in their community. But first they must formulate an idea. Their troop leaders can lend them support by reviewing their projects, or they may seek guidance from trusted adults in the community. But they own the project.

Once the project is thought out, a written plan must be drawn up and presented to a review board. For Troop 316, Dwight Jones will help guide the boys along with his other leaders, to be sure that when they stand before their review board they are ready.

Their plans must include an accurate budget, an explanation of the project, and all materials must be listed. The boys must use their leadership skills to raise funds, if necessary to pay for material, and may need to organize volunteer labor.

Some projects involve town planning boards or Town Council approval prior to construction.

Roy Carlesen had read in the paper that the recently built Apex Dog Park could use the addition of obstacles for the dogs to experience. He presented his idea before the Community review board and they loved his idea. He then had to take the project to the Apex Parks and Rec Director, John Brown to be officially approved. He said his advisors helped him revise his plan before he presented it and that was a great help. He is working to complete the project so that he will achieve Eagle Scout this Spring.

Mike Rodgers helped install trail markers in Apex Community Park and built four trail benches on one of the trails. He said he paid for the materials with his own funds. What surprised him the most was the length of time the project took to complete, about 2-3 months in total. He said he was nervous to get his approval. He explained that his final board review was conducted like a mock trial. Who wouldn’t be nervous?

Picnic Table for the Pool

Ben Dallas recently made Eagle Scout and his project involved constructing a picnic table for a homeowner’s association pool deck. After sifting through several ideas, that proved too expensive, he simply asked his neighbors what they thought they needed? They told him “a table would be great at our pool area”. After his project idea was given the green light, he spoke with the people at Lowe’s and received discounted pricing on the supplies when they learned he was working on his Eagle Project.

These projects teach the young men how to conceptualize, plan, ask for help when they need it, speak with adults, fund raise, organize volunteers,  and see something big through to the end, all while serving their community.  It’s no wonder that Eagle Scouting is held in such high regard – it even offers men in the military 2 additional pay grades, not to mention the wonderful resume builder and recommendations for college applications.

Just one more thing that makes our area great – Troop 316 and the all the Eagle Scouts who call the Triangle their home. 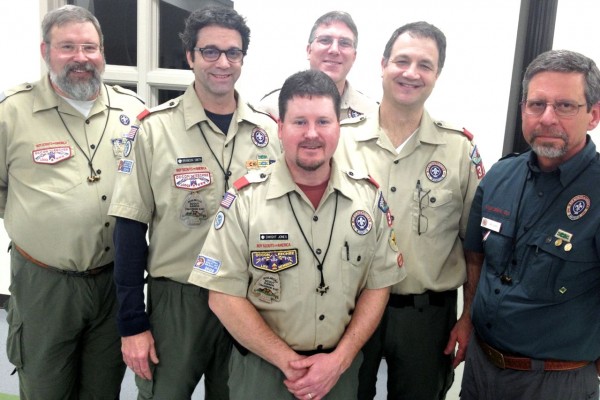 Here’s a very partial list of famous Eagle Scouts. More at USscouts.org or on Wikipedia.